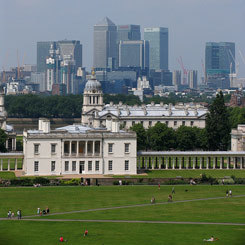 The National Maritime Museum in Greenwich, proud resident of the handsome World Heritage-listed site that gazes imperiously across the River at the Mammon-fuelled glazed monstrosities of Canary Wharf, today has even more reason to be puffed up with pride. An Israeli billionaire has donated £20 million to build a brand new wing.

Set for completion in 2012, the £35 million total wing will comprise a large scale exhibition hall, archive centre, learning space, cafe, and shop. The considerable donation comes from the munificent coffers of 86-year old Sammy Ofer, currently ranked as the 226th richest man in the world, with an empire of shipping and ship management companies.

Ofer's life on the ocean waves began when, having been brought up in British-mandated Palestine, he enlisted with the Royal Navy and served in the Mediterranean during World War Two. He subsequently enlisted in the Israeli Sea Cadets, and upon demobilisation, slowly but firmly established himself as one of Israel's most powerful businessmen. Yet, despite residing principally in Monte Carlo, many of Ofer's vessels fly Britain's Red Ensign.

A reknowned philanthropist, the donation to the National Maritime Museum is hardly the first occasion where Ofer has spent big on culture. In 2005 he reportedly paid $40 million for a van Gogh painting, and $8.4 million for a Giacometti bronze cast, and owns arguably the world's finest collection of artworks by Marc Chagall.

Something for the National Maritime Museum to take note of: in 2006 the bashful billionaire withdrew a $20 million donation to Tel Aviv Museum of Art after other donors complained about plans to change the museum's name in his honour. We suggest they Ofer-get about soliciting opinions on the new wing's name.