Terminal 5 Opens Amidst Calmness And Serenity 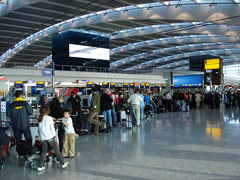 Honestly, did you really ever expect to see that headline? This is what London does better than anybody: ballsing up big civic projects. Think of the Dome, or the Millennium Bridge. It wouldn't be a proper London opening if chaos and confusion weren't part of the mix.

Despite all the test runs, T5's first day of operational use quickly turned into a farce. Early teething troubles with the baggage system meant the entire system was soon backed up worse than the lav at the Hawley Arms after a heavy Saturday night. By midday passengers on arriving flights were waiting several hours to be reunited with their luggage.

Worse was to come. BA were soon advising passengers arriving at the airport that they could only take hand luggage - a spooky re-occurrence of an issue that faced passengers at Terminal 4 in February. Meanwhile, some 34 flights were cancelled. Coining a cute euphemism, BA blamed "staff familiarisation" for the ongoing difficulties.

Sadly Friday has also been plagued by the same problems, with another 36 short-haul flights cancelled and further delays all but certain for the weekend. "Not BA's finest hour", was the verdict of airline boss Willie Walsh, getting in his entry for Understatement of the Year.

How all this will affect Heathrow's coveted title as the world's most hated airport is unclear, but we don't think the omens are positive.

A sliver of good news: the flash mob that gathered to protest against Heathrow's proposed third runway were lost in the melee and garnered minimal attention. There's a lesson here: why bother trying to disrupt operations with silly stunts when you can entrust the powers at be to cock it up all by themselves?