Thanks For Nothing, Heathrow 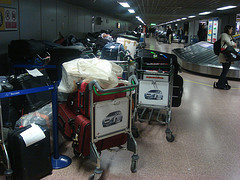 We very much hope you weren't on your way to Terminal 4 at Heathrow any time between 5pm yesterday and 10am today. Because all those lucky passengers had a special surprise when they checked in – they weren't allowed to check in any luggage. That's right. Hand luggage only. What a massive pain in the ass.

Terminal 4 experienced what they're calling "a major baggage system failure", which has only just been resolved. And just when we were thinking lovely happy thoughts about Heathrow after they lifted the silly one hand baggage only rule. They have to go and mess things up again.

All airlines operating out of Terminal 4 were affected, which meant that most British Airways passengers were inconvenienced, as well as a whole bunch of other airlines. If we'd been travelling yesterday, we would have been in fits of rage so our sympathy goes to all those passengers.

We do understand that unexpected things happen, and no system is perfect. But, seriously. There's no backup system? The baggage handling system fails and the whole terminal just gives up? They can't get, oh we don't know, people to look at the luggage tags and put them on the right planes? We're probably over simplifying things, but really.

Heathrow, we want to like you. We really do. Why do you make it so hard?