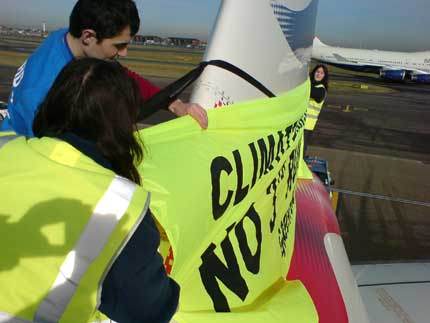 Four Greenpeace protestors mounted a freshly landed Boeing 777 on the tarmac at Heathrow this morning to protest against a 3rd runway and it's implications for the "climate emergency".

BAA are calling the protest "unlawful and irresponsible" which it probably is but, more pressingly, how the hell did 4 volunteers with a flourescent banner manage to walk from Terminal One, across the tarmac to the plane and clamber on top of it without hundreds of security people running after them? Or were they all tied up making people take off shoes and belts and dispose of bottles of water at departures?

The latest news from Greenpeace is that the protestors have been arrested, although there's no word on charges as yet.

There's info on the rally about the Heathrow expansion plans at Central Hall, Westminster tonight from 7pm and rumours of a T5 opening flashmob on the Greenpeace Blog.

Image courtesy of the Greenpeace blog.