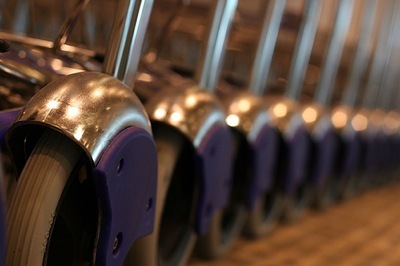 This Londonista popped to Terminal 5 at Heathrow - due to open in a month's time - and live-blogged about it:

It's 7.35am on a grey Saturday morning, and I'm on the piccadilly line. Sure - there are better things to do with my time, but I'm off to be a fake passenger and so to have a nosey around a new iconic building that swishly calls itself 'T5'. It's almost an airport in itself, it's so big - and it will apparently revolutionise the way we fly. Let's see.

8.29. Hatton Cross bus station. Nice - will the glamour never end? We're bussed to the briefing, past a forlorn Concorde stuck in a car park. That was the future, once.

9.02. The pre-briefing is in one of the drearier local business hotels. A nice woman puts a bright yellow lanyard round my neck which means I'm now official. 2,000 people will have these on today, which gives the whole place an aura not dissimilar to a Liberal Democrat Conference. Only with more people.

09.40. Locked in a hall for the pre-brief, we wait while we're sniffed by police dogs who run underneath everyone's chairs. Afterwards an odd woman participant takes out a trumpet from her case and plays to an unwittingly captive audience. Staff take on a clear 'what a fruitloop' expression.

10.47. When you see T5 from quite some distance away, it just looks like a large hanger of a building - a big box with a curvy roof. As you get closer and you start to realise just HOW big it is, and that every exterior wall is glass - it makes you want to see inside.

10.51. We drive up the spur road (built to connect T5 with the M25) and suddenly we're there - dropped off and walking inside. I knew it would be big and airy, but with its cavernous space, and a roof so high above, the whole place has a bit of a cathedral-like air to it. A single massive plasma screen can be seen from everywhere in the entrance hall, a bit like the ones at large pop concerts.

10.53. Enormous signs (some 2-3 floors high) help navigate your way round, which is handy. Like it. An enormous plasa screen high up is visible from everywhere - a bit like at a pop concert.Have always thought that the yellow BAA signage was always a bit tacky, 'functional 70s' and worn-looking - but on big modern screens with clean edges the bright yellow really works.

10.55. I'm off on my first flight "to Lyon". No club lounge for me! All the shops look just about fitted. All good so far - the lack of feeling 'hemmed in' is a definite positive, but whether this is because of the space or because there aren't massive numbers of people I'm not sure. I sneak to get an early lunch and watch the odd plane take off - massive glass walls mean you get good views of the airfield. The plane-spotters must be creaming themselves in spod corner.

11.03. Who invited the troops of cub scouts?! When I was a cub we had one trip away a year and that was a couple of hours - max - in a minibus. Do they fly BA long-haul now?

11.25. The internal floors (4 of them in all I think? 5?) all stop before the external glass walls, leaving an open gap from ground to roof all the way around the inside of the exterior wall of the building, giving more air and space.

11.27. Not fond of some of the temporary slogans up on tarpaulins. One says 'Buildings can shape our future, but it's our PEOPLE who will make Heathrow great.' Ugh. I go through security, with bags being whisked away for further examination by dynamic belts. Apparently much of the basement of T5 is made up of a dynamic system where bags whip along at 30mph. Let's hope they lose fewer of them.

11.43. There are copies of the Daily Mail on seats at departure gates. I hope this isn't repeated when it opens or there will be a sudden spike of bigotry in outbound visitors from the UK. 'Not One Prison Cell To Spare' booms the front page from every seat. 'We've lost control of our borders for the first time since 1066' it says inside.

12.35. Am now a connecting passenger from Nice en route to JFK. This is traditionally one of the worst areas of the airport for congestion, and it while it now looks a lot nicer, it's still no fun stuck in huge queues. T5 was supposed to solve this, no?

12.48. Sorry, rushing for my flight to JFK. Got to go shop first - there's Prada, next door to Tiffany. Gordon Ramsey is next to Harrods - which is fitted out like a futuristic hospital operating theatre, all gleaming white. The ever-present Retail Opportunity is in force here, but not oppressively so.

13.29. Final journey in, this time from Chicago. Massive queues at the UK border - and the new staff uniforms of UK Immigration make them look like prison officers - not terribly welcoming as a first impression.

Was it the finest passenger experience of any airport in the world? Well if they can just make flights leave on time and stop losing my luggage I'd be happy. Even if it doesn't work perfectly, it looks great though - and you can always pop for a bit of a shop.

Trolleywheels pic - not from T5 - borrowed from Kirk Siang's Flickrstream