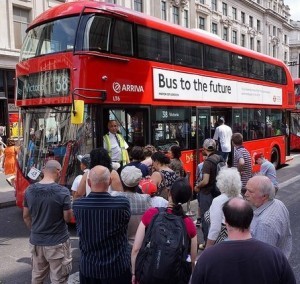 The costs of the New Bus for London (NB4L) have come under scrutiny again, raising the distinct possibility that actually it's only the Mayor who will ever want to buy them.

It's not the first time the finances have been examined. Last year when Transport for London (TfL) revealed the figures, suspicions that Londoners were paying over the odds compared to a standard hybrid bus were confirmed. It's hardly news that TfL has been on the wrong end of some less-than-advantageous deals  — Barclays and Emirates being the two that spring immediately to mind.

While this could make an interesting debate about use of public funds to create a monopoly, the prospect of being stuck with 600 of the monsters in 14 years' time doesn't fill everyone with joy. Green Party AM Darren Johnson said:

“I have no doubt that the next Mayor will cancel this entirely wasteful project, but Londoners will still be stuck with 600 of these buses for the next 14 years as TfL have nobody to sell them to.

“We desperately need innovation in London’s bus fleet and this money would have been far better invested in new technology, such as electric and hydrogen buses.”

Another of Boris Johnson's pet transport projects, the Thames Estuary airport, was finally torpedoed by the government's Airports Commission earlier this week, though the fantasy appears to live on.