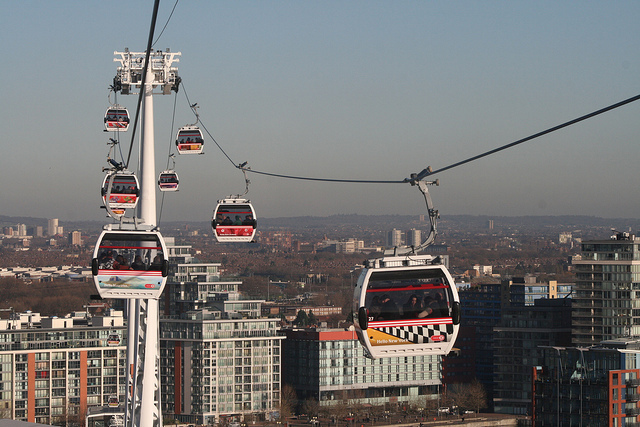 The cable car is costing around £500,000 a month to run at the moment, according to Transport for London.

The Emirates Air Line, if we're giving it its posh name, opened in June and enjoyed a surge in ridership during the Olympics and Paralympics, when it connected two major venues. Back then around 20,000 people a day enjoyed the view. By November that had fallen to around 3,000 per weekday and between 10,000 and 16,000 on weekends with very few multi-journey pass sales, raising further concerns that it's a tourist attraction – an assumption not really helped by its website. You might see figures quoted that ridership has been as low as 301 a day; that happened on Monday 24 September when the cable car was closed for eight hours because of high winds. That's not an unusual occurrence, though normally for less time. Lack of reliability could be another reason why commuters aren't willing to build it into their regular journey.

The Air Line cost £60m to build, part-paid for with £36m of sponsorship from Emirates coming in over nine years and an £8m grant; add on £6m a year operating costs and it's clear that this piece of infrastructure needs to attract more regular travellers. TfL won't say how much they've taken in fares, but if we use numbers from October (rounding down to take half term into account) we get a rough monthly figure of 153,000 passengers (in December it was around 90,000, but that includes Christmas and New Year). Assume they're all adults (they're not); assume a mid-point of pricing (say, £3.80 each) and that produces fare revenue of £581,400 a month – and that's definitely an over-estimate. So the cable car is probably barely paying for its own running costs, never mind paying back what it cost to build. So much for not costing the taxpayer anything.

Even TfL's own Journey Planner doesn't advise using it unless you specifically say you want to travel between "Greenwich Peninsula" and "Royal Docks"; a journey request for North Greenwich to Royal Victoria suggests the tube and DLR. And no wonder: the Emirates Air Line takes 7 minutes (plus walk at either end to connect to other transport) and costs £3.20 one way on Oyster. The Jubilee line plus DLR takes between 6 and 9 minutes and costs £1.60 peak / £1.50 off peak on Oyster. We know how we'd travel.