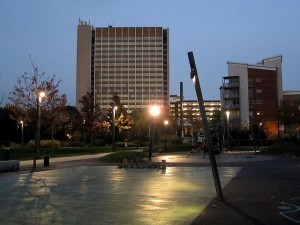 City Hall was criticised last week for underspending by around £120m on its affordable homes programme this financial year. The mayor's office explained that there's been a change in the way developers are paid (100% at the end of the project, rather than 75% up front) but this, and a cited fall in completed home numbers, prompted us to take a look at the housebuilding figures.

What we expected to see was one of the troughs of the funding cycle. Housebuilding is funded through a number of agencies, but the main source of cash comes from the government's Affordable Homes Programme. This body gets a pot of money to last it a number of years (currently, 2011-2015; the previous funding cycle was 2008-2011) and so what tends to happen is a lot of homes finished towards the end of the cycle and a drop off at the start of the next.

But we were surprised. City Hall provides details of housing starts (construction begins) and completions (the home is finished) that it has funded from April 2008 to January 2014, primarily using money from central government schemes. As you can see, the numbers of affordable homes being built during the current funding cycle are far below what were being built during the previous one:

Of the affordable homes completed in 2011-12, 15,388 of them were paid for by the previous funding cycle, called the National Affordable Housing Programme. In fact the NAHP was still paying for 6,761 completed homes in 2012-13 and 2,126 completed homes this current financial year. It seems quite clear that nearly three years into the Affordable Homes Programme, it's not creating anywhere near as many places to live as the previous scheme.

There will be a number of factors to explain this. One could be that the Affordable Homes Programme might still be getting up to speed – it's clear that housing starts made under the NAHP are still being finished several years after it closed. But it's difficult to overlook that the money available from central government is far less than the previous funding cycle (£4.5bn compared with £8.4bn). The idea is that developers will make up the gap by charging higher rents to tenants – of up to 80% of the going rate in the local area ('market rent').

Some other figures from City Hall allow us a snapshot of how that rent policy is working out. Of homes built under the Affordable Homes Programme since April 2011, Brent, Havering and Redbridge are taking advantage of the 80% market rent ceiling: the average rent charged in their homes is 80%, the highest it can go. Bexley, Croydon, Greenwich, Harrow, Hillingdon and Lewisham aren't much better with average rents of 75-79% of local market rent. As we've argued before, in the current rental climate this is hardly the definition of affordable.

Lambeth's new build rents average out at 27% of market rate, Newham at 39%, Southwark at 42% and Tower Hamlets at 46%. City Hall wants to keep average affordable rents across London to 65% of the free market rate; it's currently 69%. So we have fewer 'affordable' homes being built, and they're getting more expensive.

Boris Johnson has committed to deliver 100,000 "low cost homes" by 2016. Deputy mayor for housing Richard Blakeway insists that plan is on target, but with these figures we don't see how it possibly can be. Perhaps the intention is for a two-year building spurt or private developers to take on the mantle of creating homes that ordinary Londoners can afford, instead of homes that can be flogged off as investments overseas. Given the state of London's housing crisis, we desperately hope City Hall can pull something out of the bag.

Photo by Andy Worthington from the Londonist Flickr pool