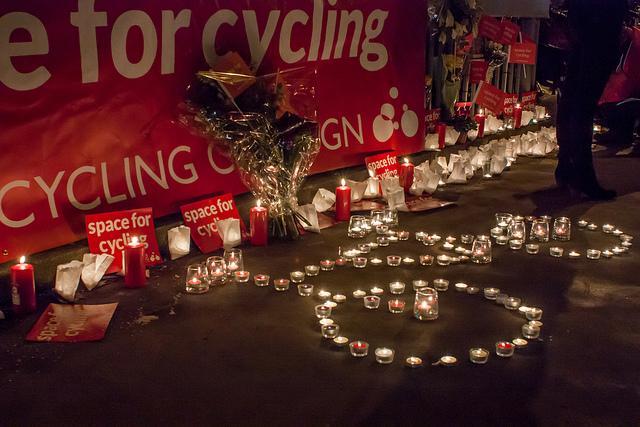 This is unbelievable. Another cyclist has died on London's roads, the fifth in nine days.

A man died in hospital earlier this morning following a collision with a double decker bus near Aldgate East station – in the vicinity of where Philippine De Gerin-Ricard died – on Cycle Superhighway 2 around 11.30pm on Wednesday night.

This follows a death at Bow Roundabout on Wednesday morning, one in East Croydon on Tuesday, and the deaths of Brian Holt on CS2 in Mile End last Tuesday and the death in hospital of Francis Golding after a collision in Holborn also last Tuesday. There have also been serious injuries caused to cyclists in several other collisions.

Following a no-show by Transport for London and anyone from City Hall on BBC London News on Tuesday, Boris Johnson gave an interview to Tim Donovan last night. He said:

Clearly, one death is too many on our roads, on our Cycle Superhighways. Our thoughts are very much with the families of those who have been bereaved in the last few days. If you look at the number of deaths that we are sustaining of cyclists, they are down on where they were five years ago quite considerably as a percentage, and yet we've seen a massive increase in the number of cyclists.

When challenged by Tim Donovan on whether it's time to scrap CS2 at Bow Roundabout, the Mayor replied:

No I don't think so at all. It's very important to continue with the Cycle Superhighway programme, to continue to make cycling ever safer and invest in cycling. We'll see what happened at Bow Roundabout, we'll analyse it. There's no traffic engineer in the world who can accommodate every eventuality.

Donovan put it to the Mayor that the Cycle Superhighway programme went ahead too quickly and had corners cut:

I think you could argue, if you look at what's happened, that our interventions to make cycling safer are steadily working. Every death is one too many. I am proud of our record on our cycling and am determined to make the investments in London's roads that will make it ever safer.

The number of cycling journeys has gone up in the last few years while the numbers of deaths have been 2012: 14, 2011: 16, 2010: 10, 2009: 13, 2008: 15. So far this year, 13 cyclists have died. However, it's not enough for TfL to congratulate itself on keeping death rates more or less steady as the number of miles travelled increases. Part of that increase is because of initiatives to get more people cycling, initiatives like the Cycle Superhighways that encourage cyclists to use them and yet, as found by a coroner, have no legal status in parts and sometimes take cyclists through more dangerous positions. There is no numbers trade-off to play here: if Londoners are being encouraged to get on their bikes, the infrastructure should all be fit for purpose.

The Independent quotes Andew Gilligan, the Mayor's Cycling Commissioner, as warning against rushed decisions about making changes to the roads. As we reported yesterday, the Mayor's office is clearly taking that advice while deciding where to put the cycling budget as no detailed breakdown of how the 2013-14 budget is being spent is available.