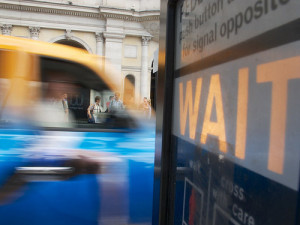 Figures from Transport for London (TfL) show an increase of 8% in the number of people fatally or seriously injured on the capital's roads last year.

While fatalities were down from 159 to 134 last year — including 69 pedestrians, 14 cyclists, 27 motorcyclists and 19 car occupants — the total number of people killed or seriously injured has risen to 3,018 from 2,805 in 2011. TfL say 24,059 road traffic collisions involving personal injury in total were reported to the Met and City police during 2012.

TfL commissioner Sir Peter Hendy came in for some criticism while speaking about the figures on LBC radio, saying the reason for the cycle hire's good safety record was "because they’re big, they’re slow and they’ve all got lights on the front and the back and the lights flash all the time” before adding:

“Actually, I wish every cyclist in London had decent lights on the front and the back.”

It's debatable whether flashing lights could have prevented any of the last year's cycling fatalities, but we're going to generous to the commissioner and concede that anything which helps increase visibility of vulnerable road users can't be a bad thing.

Concerns over roads safety were raised again last month following the inquest into the deaths of Brian Dorling and Philippine De Gerin-Ricard, both of whom died after being hit by HGVs on the Cycle Superhighway. The Cycle Superhighway 2 extension opened yesterday (albeit not officially — that's next week), with a lane on Stratford High Street now segregated from traffic. You can see Diamond Geezer's commentary on it here and here.

TfL has also announced four safety campaigns for pedestrians, cyclists and drivers, urging them to be more aware of other road users. In last month's Mayor's Question Time, Boris Johnson restated his commitment to improving road safety, but said that within the context of increased cycle journeys in London, the numbers of fatal and serious injuries had fallen by 22% in the last 10 years.

However the figures are interpreted, Green Party AM Darren Johnson is calling on his fellow assembly members to ask serious questions on road safety at the upcoming TfL board meeting.

Photo by Ian Gibson in the Londonist Flickr pool.