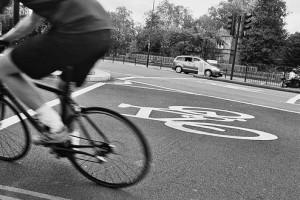 The fourth cyclist in eight days has died after a collision with a lorry at Bow Roundabout this morning, while two others were seriously injured in separate incidents at Millbank and Vauxhall Bridge.

The Bow Roundabout collision happened at 8.45am and the cyclist, a woman in her 20s, was pronounced dead at the scene. The Millbank accident occurred shortly afterwards at 9am, with the male cyclist being taken to hospital by London's Air Ambulance. The female Vauxhall Bridge cyclist was also taken to hospital with leg injuries.

Last week, a man in his 40s was struck by a bus in Croydon, Francis Golding died after a collision with a coach at Southampton Row and Brian Holt died in a collision with a lorry on the CS2 on Mile End Road. Meanwhile, another cyclist was injured in a crash with a bus in Kennington while Claire Pepper narrowly avoided serious injury after being trapped under a car at Spitalfields.

The tragic spate of fatalities and serious injuries on the roads have led to some improvements being announced, but cycling groups say it just doesn't go far enough.The London Cycling Campaign (LCC) wrote to TfL Head of Surface Transport Leon Daniels back in September to warn of the risk to cyclists from turning vehicles at Bow, despite the installation of the 'early start' facility. Green Party AM Darren Johnson said:

"The Mayor’s failure to make roads safer for cycling in the last six years is the reason we are having so many tragedies now. The Mayor has been in complete denial about the scale of the problem and his personal responsibility for dealing with it. His repeated talk of our roads getting safer does not match the reality, especially when there is no obvious plan or timetable for action."

A question from Johnson to London mayor Boris Johnson back in July on how this year's cycling budget is being spent has yet to receive a reply.

The LCC and the Green Party's Jenny Jones are calling for a protest tonight at 6.30pm at Bow Roundabout while Labour AM John Biggs is urging Mayor of London Boris Johnson to sign up to the London Cycling Campaign’s Space for Cycling campaign. Watchers of last night's BBC London News will have noted that no City Hall or TfL representative was available to comment on the cycling incidents.

In October, Coroner Mary Hassell published her report following the inquest into the deaths of Brian Dorling and Philippine De Gerin-Ricard, calling on the mayor to take action to prevent further fatalities.

TfL recently released figures which showed a decline in the deaths of cyclists on the capital's roads from 2012. We anticipate some further tough questioning for the mayor in the next Mayor's Question Time on 20 November.

Photo by Jon Smalldon in the Londonist Flickr pool.