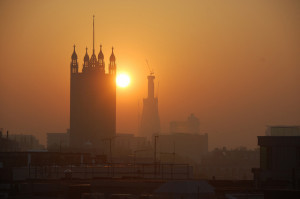 Live in the borough of Bromley? Congratulations! You're the only London borough where fewer than half the main roads are below the legal limit for nitrogen dioxide air pollution levels, according to the Green party.

London Assembly Member Jenny Jones has produced a breakdown by borough of how many main roads broke the EU legal limit for NO2 in 2012 (to be technical, that's no more than 18 occurrences of hourly mean >200μg/m3 each year), as measured by the London Air Quality Network (LAQN) at King's College.

100% of sites measured in the City of London, Westminster, Kensington and Chelsea, Camden and Hammersmith and Fulham broke the legal limit; as did over 90% of the sites in Tower Hamlets, Islington, Southwark, Lambeth, Hackney and Wandsworth; Newham, Lewisham, Ealing, Brent, Hounslow, Haringey and Redbridge score between 80-90% illegal; Greenwich, Waltham Forest, Barnet, Enfield, Kingston upon Thames, Barking and Dagenham and Merton rank 70-80%; the other boroughs are between 50-70% apart from Bromley, where only 45% of sites monitored were over the EU legal limit. Overall, 78% of London's main roads measured too much nitrogen dioxide in 2012. (ITV London has the exact figures.)

Nitrogen dioxide can affect people's respiratory systems, inflame the lung lining and increase susceptibility to infections like bronchitis, and is thought to particularly affect asthmatics. It also reacts with sunlight to create ozone and helps in the formation of particles like PM10s. The LAQN says London's NO2 levels haven't reduced as much as expected, and says the blame is currently thought to lie at the exhaust pipes of diesel engines. Bad news if you live, work or go to school near a busy road.

Earlier this year the Assembly voted 16-6 in favour of a motion calling on the Mayor to develop emergency measures to bring down nitrogen dioxide levels. With around 4,000 Londoners dying prematurely because of air pollution (and 6-9% of deaths in the city attributed to particles in the air), this is something Boris Johnson does need to tackle, quickly.

See also: London’s Air Quality Is Rubbish, But What Can Be Done?