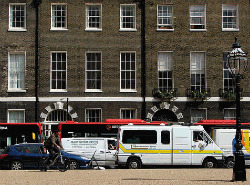 Photo by Manuel.A.69 from the Londonist Flickr pool
Last year we brought you the news that up to 5,000 Londoners might be dying early because of shoddy air quality; now a report from the Institute of Occupational Medicine confirms that an "estimated 4,267" (if that's an estimate, we'd love to see them be precise) people in the capital die prematurely each year because of long-term exposure to pollution. (Point of order: we can't find the report in question on the GLA site and we work all day on t'internet. If anyone finds it, can they post a comment? Ta.)

Bryanston and Dorset squares in Westminster are the most polluted, with Marylebone High Street, Kings Cross and the City not far behind along with, worryingly, Hyde Park. Less a lung of London and more a wheezing mass of emphysema. But while the inner boroughs are the most polluted, the outer boroughs suffer the most related deaths; working in zone 1 is a health hazard, basically.

The City of London went over its annual allowance of 'bad air' days last week and now we can expect to be hit by fines from Europe. With the LEZ postponed and the WEZ scrapped, Boris's Air Quality Strategy will need to come up with some big ideas to make our air sweet again.