London's Air Quality Is Rubbish, But What Can Be Done? 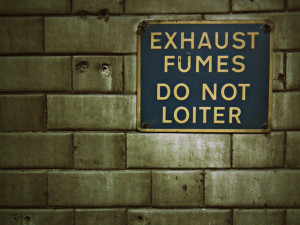 Just because London doesn't get peasoupers any more, the air pollution problem isn't fixed. Instead of soot, our pollution is made of carbon monoxide, nitrogen dioxide, ground level ozone, sulphur dioxide and particles known as PM10, fine particles that stay in the air and can penetrate deep into the lungs. London regularly breaches EU limits on air pollution – we're allowed 35 'bad air days' a year but had 57 in 2011 – and have only avoided fines by wheedling extensions: you could say this is meddling bloody Europe, but when air pollution hastens the demise of an estimated 4,000 Londoners every year, regulation is attempting to save lives.

But because we can't see it, air pollution tends to get forgotten. We picked up the phone to Dr Benjamin Barratt of Kings College, who's part of the London Air Quality Network (LAQN), an academic group doing scientific work on air quality and working with local authorities and public bodies to increase public awareness of air pollution and making sure measurements are comparable.

"Air pollution is dictated by weather," explains Barratt. "When there's windy weather from the Atlantic, pollution levels will be relatively low compared with still weather, like a foggy winter morning or sunny summer day." The main problems are dispersal – wind and rain lower pollution levels, either by moving it elsewhere or washing it out of the air. "Easterly winds import pollution from Europe. A large amount of London's pollution comes from the continent and that's something the EU needs to tackle in a co-ordinated way."

Of our own, locally generated pollution, levels are different around London. "The air quality in a narrow street canyon with queueing traffic is going to be bad," says Barratt, "but in a park it will be much better. Diesel is a big problem for London. Though it produces less CO2 it gives off high levels of particulate matter."

Taxis and buses are particular diesel offenders in central London; Boris Johnson promises 600 more of his fuel-efficient New Bus for London, but Jenny Jones points out that 96 hybrid buses could have been bought for the cost of the first eight. A fund that should have developed a new electric black cab is being put towards helping cabbies switch to newer conventional models, and lack of infrastructure has contributed to Boris's plan for 100,000 electric vehicles on London's streets flopping. The Greens would make sure all buses are hybrid, hydrogen or electric by 2016, offer low emission taxis for rent and loans to small businesses to buy cleaner vehicles. The Lib Dems plan a Big Switch where all buses and taxis and most commercial vehicles would be electric by 2020. Labour also promise a fleet of new electric buses and taxis, but are lacking in numbers and dates.

Barratt says there are a number of other ways to tackle air quality: on the local level, boroughs can manage traffic and make sure schools, nurseries, care homes etc aren't built on busy roads. On a Londonwide scale it's not actually clear yet which of the available schemes, like the Low Emission Zone, are the most efficient and effective air quality strategies, but (and this is our argument) you only get data by trying.

One highly controversial strategy the Mayor is employing is the use of dust suppressants at pollution hotspots. These 'glue' particulates to the roads, "like damping down a dusty surface," explains Barratt. Some campaigners call its use a fraud to artificially lower levels at monitoring points, avoiding EU fines while doing nothing to prevent pollution building up around the capital; TfL says it's a way of reducing pollution concentrations in the worst affected areas.

If you want to avoid air pollution, the best thing to do is stay inside on highly polluted days and close the windows. That's not always practical, so Barratt advises trying not to walk next to busy roads at peak times and, even if you're healthy, official advice is to not exercise on days when pollution is classed as "very high" (we've already had some very high days and it's not even summer). "Different people are affected by air pollution in different ways, and experience different effects over short and long term exposure, but the main two are respiratory – breathing and sinus problems – and cardio-vascular. Air pollution is thought to increase the risk of heart attack, though on hot, polluted days, heat is also a factor," Barratt says.

If you want to know what level pollution is at, you can look at the LAQN website, download their iPhone and Android apps or Chrome browser extension, or you can sign up for notifications from your borough.