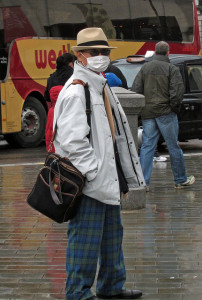 A London Assembly report on air pollution has flagged up a statistic that up to 9% of deaths in London can be attributed to man-made airborne particles.

The Public Health Observatory looked at all causes of adult mortality, according to 2010 figures, and worked out how much was down to long-term exposure to fine particulates in the air (known as PM2.5, different to another notorious form of particulate pollution, PM10). In the City of London it was 9%, Kensington and Chelsea and Westminster 8.3%, going down to 6.3% in Bromley and Havering. Even this is higher than the England average of 5.6%. (To get to those figures, select indicator 3.01 and then choose London from the region drop-down box.)

The Mayor's office told the BBC

Air quality is undoubtedly a serious health issue, but this report presents complex statistical data in an overly simplistic and alarmist manner.

Of course, we all have to die of something, but airborne particles can contribute to heart and lung problems and possibly breast cancer and diabetes. We already know that air pollution causes 4,000 of us to die prematurely each year. The report also highlights that the issue of air pollution is quite tricky: some hybrid buses generate more PM emissions than normal diesel buses, which is the point we threw our hands in the air and muttered something about not being able to win.

When it comes to how we get around, it seems we are ditching cars more. The census revealed that London is the only region in England and Wales where the number of cars and vans is lower than the number of households, and the Assembly's report predicts the number of journeys taken by private vehicle to drop from 43% in 2006 to 37% by 2031. Now, if we can just find the all-round cleanest method of public transport...