What Are The Solutions To London's Housing Crisis? 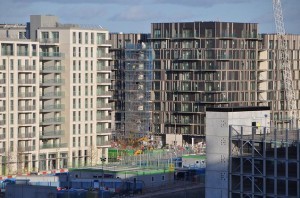 We've established that it's difficult-to-impossible to live in London on less than the living wage, and that it's not practical to move lots of people on low incomes to the cheaper boroughs. At this point in our research we got depressed and started asking around for ideas to make it all go away.

What we found was this: housing in London is complicated. Bloody complicated. Tugging at one thread unravels a whole other tangle over here that you didn't even know about. But what it all boils down to is that London doesn't have enough housing, at all, full stop, so the extra demand pushes prices up out of the reach of not just those on low incomes, but increasingly middle incomes as well. And the solutions to sorting out the affordable housing problem would benefit all of us. We spoke to three members of the London Assembly: Andrew Boff (Conservative), Tom Copley (Labour) and Darren Johnson (Green), and London Councils about what needs to happen.

One idea to cut the benefits bill is to pay people more, an idea that Boris Johnson backed at the last Mayor's Question Time. Putting more people on the London Living Wage (currently £8.55 an hour) obviously increases their spending power; but businesses would doubtless complain about their bottom line and customers would doubtless complain about any price increase. But the fact remains that benefits are subsidising low pay. Another approach to the same problem comes from the Adam Smith Institute, which suggests lifting those on minimum wages out of tax.

Dealing with pay doesn't address the lack of actual housing, though. We can't all keep getting a pay rise to cover spiralling rents, and the simple statistic that 24% of London's children live in overcrowded homes illustrates that there isn't enough property for all of us. Boris thinks he can build enough homes to plug the gap in 10 years, which sounds optimistic at best. Everyone agrees we need to build more homes (and at a local government level, everyone agrees that the receipts from right to buy should be ploughed back into housebuilding; something that national government blocks), and there are plenty of ideas on how to do it.

London Councils and Tom Copley both called on the government to lift the cap on councils being able to borrow in order to build more housing. "Everything comes back to affordable housing," said the London Councils spokesman. Tom described how the private sector has never been able to fill the gap left by the lack of council building in the last couple of decades, and that's had a big impact on supply. A shortage of social housing pushes more people into the private rented sector, which in turn pushes up rents and makes greater calls on housing benefit. Social housing makes financial sense long term: the main taxpayer subsidy goes on the building, which is paid back in rent and the reduction in housing benefit. In fact, Darren Johnson has worked out that if the UK's social tenants rented privately, it would cost an extra £5.3bn a year in benefits (PDF).

Andrew Boff says the emphasis should be on high quality family housing. There's no point throwing up all these high rise developments of one and two bedroom apartments when families need more space, indoor and outdoor. We were sceptical about proposals to build low-rise developments with gardens instead of tower blocks, but he patiently explained that if you take the footprint of a tower plus the surrounding green space, and build 3-4 floor mews houses with gardens instead, while you wouldn't get quite the same density you would at least get homes that people want to move into that will last a century (and since we're typing this in a terrace built in 1900, we concede he has a point). Young professionals and elderly people like the convenience and security of blocks, but shouldn't London's housing stock be as diverse as the people?

But this is all long-term. Rents are increasing by double figures every year and are currently two and a half times higher in the capital than the rest of the country. We need action so Londoners rent affordably now. And that would seem to involve some kind of rent control. There are various ways that could work, but the most popular suggestions for London are pegging rent increases so they can't go above the rate of inflation, longer tenancies offering security (particularly important for families, especially where the children have settled into local schools) and the end of no-fault eviction, where a landlord can kick out a tenant at the end of the lease usually because they reckon they can get more rent from someone else, a practice Tom Copley described as "indefensible".

The idea of rent control isn't a universally popular one; Boris Johnson keeps invoking the spectre of New York and how rent control is pretty much dying out there, and the concern that applying controls would reduce the supply of property. But interestingly, our Assembly Members don't think that's necessarily a bad thing. Both Andrew Boff and Darren Johnson thought that getting rid of bad landlords could be beneficial – the opportunistic, buy to let landlords who don't properly look after their tenants.

To counterbalance any reduction in supply as bad landlords sell up and leave the market, and/or generally increase supply of rented property, the idea of more institutional investment in the private rented sector came up. Large scale, professional companies developing high quality housing for long term leases, offering security and stability. Kind of like housing associations, but on a larger scale. But this would also take time to develop, and we're back to talking about supply again. Oh dear. We'd rather hoped to finish on a slightly more optimistic note.

Read more: Is it possible to live in London on a low income? and Why don't people on low incomes all live in the cheap bits of London?

Photo of new housing in the Olympic Village by Manuel.A.69 from the Londonist Flickr pool