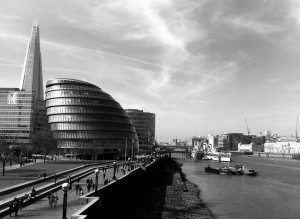 Well. That was weird. A whole Mayor's Question Time where nobody yelled, got irate or had a bust-up. We say 'whole'; our webcast connection broke up towards the end and we gave up, but we didn't see anything particularly contentious on Twitter (and after two hours everyone's pretty much comatose anyway. Ah, politics). Obviously John Biggs wittered from the sidelines, but anyone who's ever watched MQT will just take that as read.

So, in this dangerously novel atmosphere of peace and (relative) bonhomie, did we find out anything new? We did, kind of. Boris Johnson agreed with Green AM Jenny Jones that if everyone in London was paid at least the London living wage, the benefits bill would be lower. "Taxpayers are subsidising businesses who won't pay the London living wage," she said. "I do agree with that," replied the Mayor. "The answer is to expand the London living wage." You can see the full exchange in this video (sound isn't brilliant, sorry), including an idea for living wage 'zones' where all businesses would pay decent wages.

Tom Copley raised the problem of London's private rents that keep rising in double figures year on year. Boris only seems to want to talk about how rent controls wouldn't work here – the evidence from New York, he says, is not encouraging, and the German model is based on a completely different approach to the market than in the UK. Tom repeatedly made the point that these types of rent control are not the only options, but the Mayor's thinking (publicly, at least) seems to polarised between rent controls (bad) and building more homes (good).

Boris also acknowledged that it would take at least ten years to build enough homes to take the pressure off our insane housing market (and we think ten years is optimistic). And on that note... Nicky Gavron asked about the approx. 177,000 planned homes in large developments that are currently stalled. The government is allowing renegotiations on the amount of affordable housing (in other words, reduce it) to get those developments going. The Mayor said that when it comes to affordable housing, he'd rather see a percentage of something than nothing at all.

However, Nicky cited a report that found affordable housing wasn't a barrier; so reducing the amount of affordable housing is just handing developers more profit and not helping Londoners get a home without selling a kidney. She then read something from a large developer, that we presume has been leaked:

"Across the group, we are focusing on maximising value rather than driving volume."

In translation: rationing supply – landbanking – to artificially drive up prices. Boris described such practices as "pernicious" and said he's willing to use compulsory purchase orders where there are clear cases of landbanking:

To constrict supply to push up prices is clearly against the economic interests of this city.

Caroline Pidgeon wanted to know if Boris would consider bringing Crossrail under the TfL banner after revealing the company has spent £320k on photography and video, £900k on staff training and £1k on cake. We're not sure we should quibble over training (though we'd like some of that cake). Boris had a waffle and then said yes, he'd like to see Crossrail brought into TfL.

Jenny Jones questioned the Met police's plan to buy water cannon, then the costs of storing and training officers to use the things if, as Boris said, the chance of them ever being used is "vanishingly small". Well, said the Mayor,

I'm in favour of having of having a nuclear deterrent but not of using it!

which is perhaps not the strongest argument with which to convince a Green...

Tony Arbour got an unexpected positive response about his urging for the Met to introduce Track my Crime; and there was something about the future Ultra Low Emission Zone being constructed so the New Bus for London (which runs partly on diesel) would be exempt, which Stephen Knight wasn't happy about, but that's where the live webcast started to break up and the archived webcast arbitrarily cuts off before then. Technology, eh?

You can watch the webcast – minus the last half hour of the session – on the GLA website. Find out how to watch MQT in person, which is probably what we should have done.

Photo by {Laura McGregor} from the Londonist Flickr pool