Is It Possible To Live In London On Low Income Without Benefits? 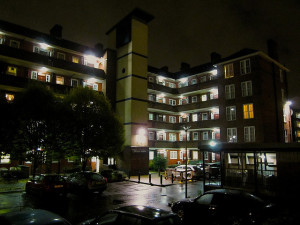 There's a lot of talk about housing benefit claimants – well, about benefits claimants in general – and housing in London is a particularly emotive issue. We regularly see comments along the lines of 'if you can't afford to live in London, don't live here', and we started wondering if it is actually possible for someone on a low income to live in the capital without claiming benefits.

So. We created an ideal scenario. We imagined a family with two children and calculated likely income and expenditure for that family, with two adults working and also for one adult working. We looked at minimum and living wages and a variety of housing options (including moving outside London). And we found that even in our fictional ideal world, we couldn't get our family to live anywhere without help on just one income. The figures are at the bottom of this post but first, here's our reasoning.

Affordable housing
As you'll know if you've ever tried to rent, the cheapest available flats are like gold dust. In our searches on Findaproperty.com there were only a couple of two bedroom flats at the lowest price points. (In our choice of two bedroom flats we're assuming that these imaginary children are the same gender, or young enough to share.) There are around 700,000 people (PDF) in London earning less than the living wage: that's a lot of people chasing not many cheap properties.

40 hours a week?
We could have made our adults work 48 hours a week, because that's the maximum number of hours a week allowed under the Working Time Directive. However, it's debatable how many people actually get to work even 40 hours a week on low wages. Many people on salaries work more than their contracted hours, but that's a very different situation to your employer paying by the clock and kicking you out when the shift's done. Also, take a look at the government's job search site and many positions are part time or, increasingly, zero hours contracts. Even patching together two of these jobs might not bring the hours up to 40. And every five fewer hours worked a week brings in £133 (before tax) less a month on minimum wage.

Childcare
If the parents are working, who's looking after the kids? Childcare is ridiculously expensive, so unless you're living near grandparents or friends (another reason to stay in a particular area), or the children are old enough to let themselves in after school, it probably works out cheaper for one parent on a low income (or an average one, for that matter) to not work. And no, we're not subscribing to the idea that poor people shouldn't have children; apart from the social engineering aspect, how many of us really know what our incomes will be over 18-21 years, up or down, boom and bust?

The flats
We looked on Findaproperty.com for what seemed to be the standard bottom line in certain areas, and there were only ever a couple at the lowest price point. (We had a quick look at the accompanying photos and they didn't look like damp covered, rat infested pits, but you can never tell.) This is the best scenario for our family but there aren't enough of these cheap flats for everyone who needs one, so a more likely situation is at least £100pcm more. Several properties also refused to take tenants on housing benefit, which reduces the available pool even further. Point of interest: we first did this research in January, and some rents have gone up about £50 a month since then.

Move out of London?
That might sound like a reasonable idea: after all, rents are a lot cheaper outside London, aren't they? Yes. But not enough to offset the increased cost of travel back into town, as we found when we looked for flats in Milton Keynes, Sevenoaks, Chelmsford and Guildford and then added on the cost of a monthly rail season ticket plus travelcard (lucky the worker who has a job near their London terminus). There's also the issue that some low paid jobs have hours that don't fit with the timetables. So long as people are needed to clean London's shops and offices, make coffees and serve in shops, they're going to have to live here.

The reality
Going by these figures then, yes, it's entirely possible to live in London without benefits if there are two people working (and let's not forget that only 1 in 8 of housing benefit claimants are unemployed, and over 90% of new claimants are in work). But this is, as we've said, an idealised situation. The best case scenario, if you will. Start removing some hours of work and the probability that the cheapest flats aren't available, and the amount of available cash gets ever smaller. And of course, we can't expect people to spend every last penny on their rent: what about clothes, shoes, occasional tube travel for the kids, treats, emergencies, putting some money to one side for a rainy day?

The numbers
Here are our figures. We took a family with two children and worked out the income if two parents were on the minimum, and also living, wage; also what would happen if only one parent had work or is a one-parent family. We also included child benefit for two children (around £145 a month). We didn't include any other benefits a) because the benefits system is quite complicated and b) that was the whole point of this exercise.

We then looked for the cheapest deals we could find for bills (and in the case of water, used our own). You'll notice that we've included broadband in here; the UN considers internet access a human right (though who paid for the computer to use it with, we'll leave to your imagination). We haven't included mobile phones, though. For food, despite that Sainsbury's ad a few years ago boasting how you could feed a family of four on £50 a week, we've gone with this assessment that it's more like £80 a week.

We've also used travelcards as the basis of our transport costs, even though buses are cheaper. We decided that if our fictional parents are working 40 hours a week, they might like to get home in time to see their kids before they go to bed rather than spending ages on the bus. (The kids can use free bus travel to get to school.) We also assumed that jobs were in zone 1 – yes, we know that there are jobs all over London, but we tried to keep it simple.

*Edit November 2013: we've since realised that when we did these calculations, we made some mistakes that made the results more generous. We've now updated.

So, where can they afford to live?
These were the cheapest two bedroom flats we found in the following areas:

Read more: Why don't people on low incomes all live in the cheap bits of London? and What are the solutions to London's housing crisis?