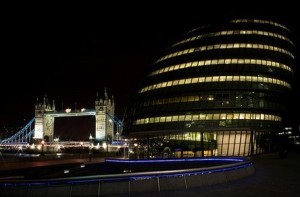 Following the previous pleasant and informative edition of Mayor's Question Time, we faced a return to trouble when yesterday's meeting started out with the acknowledgement of an unusually packed public gallery. The reason for this will become clear.

Kicking off the proceedings was an amiable exchange between the mayor and Green Party AM Jenny Jones over Johnson's recently-announced 2020 Vision for London. Jones highlighted the Zero Hunger City campaign and pointed out that it had been left out of the 2020 document. Perhaps for form's sake, Boris put up a bit of an argument that 'it's just a phrase that was left out' but agreed to pursue it separately.

The day's first argument was left to Labour AM Len Duvall who, after pointing out the dramatic rise in use of London's food banks (400 in 2009/2010 and a staggering 42,000 by April 2013) and a brief spat over whether Ken or Boris has spent more taxpayers' money on advisors, wanted to know why food poverty wasn't in the 2020 document. Another spat over Europe followed: why had Johnson's advisors chosen to brief the Sunday Times on exiting the EU rather than the London Assembly? Perhaps unsurprisingly, the Mayor chose to interpret this as a complaint about procedure. We also got a handy translation of the phrase 'working time directive' into French.

Then the action really started. Lib Dem AM Stephen Knight raised concerns over the contentious cuts to fire services in London, using the rather apt example of Clapham nightclub Infernos which could see response times doubled should it be so unfortunate as to live up to its name. The subject clearly exercised the public gallery who responded to the mayor's assurances that safety is paramount with boos and heckling which led to a mini-rant about the Lib Dems. Jones and Labour AM Navin Shah weighed in on the fire debate and accused Johnson of 'ducking and diving' which won a round of applause from the public gallery.

Despite proffering a sarcastic rejoinder to Shah over comparatively fewer cuts in his area of Brent and Harrow, when Labour AM for Hackney, Islington and Waltham Forest Jennette Arnold suggested that Johnson's home borough would suffer less with the cuts, the mayor took great exception. We think Arnold won that round after she stood up, brandishing a ream of 5,000 petitions against the closures and beat the mayor at his own game of talking over opponents to brand the cuts 'totally unfair and unacceptable'.

Repeated calls for quiet from chair Darren Johnson didn't quell the hecklers for long and MQT had to be suspended when campaigners against the closure of Bow and Silvertown fire stations started chanting 'no ifs, no buts, no fire service cuts' before staging a walkout. At that point, Johnson adjourned the meeting and we were treated to a kind of City Hall test card for a bit.

On a side note, for anyone who's ended up with an earworm of the late Johnny Cash's Ring of Fire recently, you could blame a fire engine that's doing the rounds of central London playing the song through loudspeakers in a bid to win support against the cuts.

Also on the agenda was the GLA Conservatives' call for a minimum wage holiday for small businesses (which the Mayor wasn't too keen on); not giving far-right groups needless publicity in the aftermath of Woolwich; and the troublesome issue of the fine line between free speech in the form of protests and public disorder.

You can watch the webcast of MQT here or find out how to go and watch all the action in person here.

Photo by Simon Wicks in the Londonist Flickr pool.