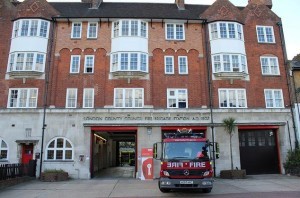 More detail has been released about the impact of proposed fire station cuts. Previously we'd been assured that, on a borough-wide basis, response times of six minutes for the first engine and eight minutes for the second wouldn't change much from the current situation. But new information (PDF) shows that 41 wards would fall outside the response target if plans get the go-ahead.

If you live in Clapham Town, you may be interested to hear that your current first engine response time is reckoned to be 3 mins 56 secs; after the changes, it's likely to be 7 mins 53 secs. Other wards where response times will increase by more than three minutes are Belsize (Camden), De Beauvoir (Hackney), Royal Docks (Newham) and Bow East (Tower Hamlets). Labour London Assembly Member Navin Shah said:

This might not sound a lot but a fire can quadruple in intensity every two minutes. These increases are truly scandalous, no wonder they didn’t release this information sooner.

Camden would see six wards taken over the first engine response target; Lewisham and Westminster five; Tower Hamlets, Hackney and the City of London four. But here's another bit of information we'd never realised: 267 of London's 624 wards already don't meet the target. Add in this extra 41 and that's nearly half of them. Rather makes a mockery of the whole idea of targets at all... Yet deaths and injuries from fire in London have been steadily falling. Do these changes even matter?

We ask because public response to the consultation was underwhelming to start with. Mayorwatch got figures on the first four meetings and found that just 73 people turned up in total – though to be fair, the first couple were held almost straight after the dates had been announced, hardly giving people time to rearrange diaries. Or even find they were happening at all. But just one person went to the meeting for Brent and Harrow on 16 April, though "dozens" turned out in Waltham Forest the day before. Do Londoners not give a tinker's fart about the plans, or are public meetings becoming more outdated in a world of online questionnaires?

Photo by Uncle Ebenezer from the Londonist Flickr pool