A Guide To The Borough Of Barking And Dagenham

Continuing our series highlighting the very best of each borough, Londonist regular Jonn Elledge offers some thoughts on his ancestral homeland.

The following is a personal selection, and not intended as a definitive list. We welcome suggestions for alternatives in each category, and will add them to the article, wiki-style, as you suggest them.

You've probably never been to Barking & Dagenham. It's not the sort of place people go.

It's London's forgotten borough, an empty flatland of council housing, arterial roads and industrial decline, famous for only two things: a slowly dying car manufacturing plant, and a four year period in which the BNP was second largest party on the council. The area combines inner city poverty with suburban desolation, and while it's only 15 minutes up the line from Fenchurch Street it feels somehow remote: with London yet, somehow, not of it. Even the shape of the borough looks like it's giving you the finger from the map.

The reason for this semi-detachment, I think, is economic. If 21st century London has one overriding characteristic, other than housing costs that make your kidneys ache, it's the diversity. In this city, you can find people from everywhere, in every job, on every income, living every lifestyle. Barking, though, is remarkably homogenous. It's predominantly white, though getting less so. It contains great poverty, but no great opulence to balance it out, and more than half of its population live on a single giant estate. Historically, many of them even worked in the same place.

Much of this is changing. That employer, the Dagenham Ford Works, now has just a tenth of the workforce it once had, and the last 15 years have seen the borough become increasingly ethnically diverse.

But nonetheless, as London has boomed into a multicultural world city, a sliver of post-Thatcherite de-industralisiation – largely white, largely poor – has sprung up in our midst, 14 square miles that are more Sheffield than Shoreditch. Worst of all, nobody seems to care. The only time Barking warrants a mention is when the locals do something regrettably stupid at the ballot box.

And – we should care. Despite what both of them seem to think sometimes, the borough is a part of this city. London and Barking alike, I’d posit, would benefit from knowing each other better.

With that in mind, here are 10 interesting things you might find if you travel to the forgotten end of the District line.

The first of our sights is not, frankly, a traditional tourist attraction – but if you want to understand this place, it's a must see.

After the First World War, the London County Council embarked on a major public works programme, with the goal of replacing East End slums with homes fit for heroes. Its largest project remains the largest public housing development ever attempted: the Becontree Estate, 27,000 homes containing 100,000 people.

In many ways it was an immensely progressive development. Every house came with an indoor toilet and its own garden. The estate is far more spacious than the crowded streets it replaced. In other ways, though, it was an urban planning disaster. There's no focal point, no town centre, few amenities. And the wide streets meant to create that sense of space somehow add to the desolation: Becontree sprawls for miles, without ever seeming to get anywhere.

For students of London’s urban development, though, it's certainly worth a look. It's so vast, what’s more, that if you're visiting the borough, it's all but unavoidable.

The Town Square is the centre of the area's regeneration efforts. Completed in 2007, the hyper-modern and brightly-coloured development houses a library, a gallery, an arboretum, 246 new homes and a "folly wall" (effectively, a chunk of the site’s previous occupant, now tumbling down in a picturesque manner). The square itself is frequently used for outdoor events.

The development has won seven different architecture awards and been shortlisted for three more. Not everyone's a fan – this guy was unable to resist the urge to call the judges 'Barking Mad', comparing the space unfavourably to East Berlin – but it does show what investment can do to an unpromising bits of public space. 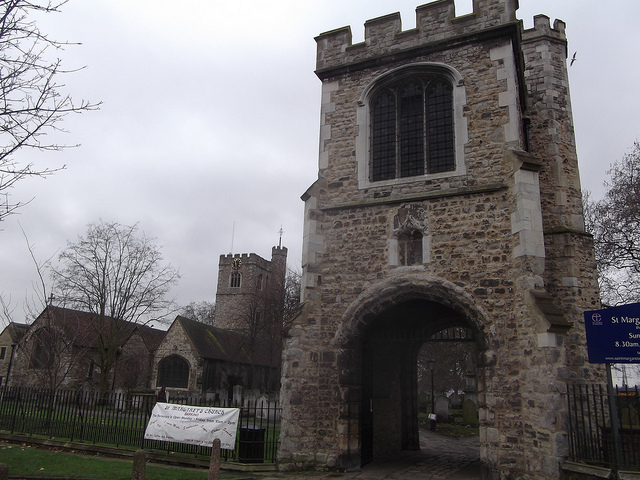 Barking Abbey is where Barking started, in the year 666. Despite getting smashed to bits by Vikings, it stuck around for the better part of a millennium before being dissolved by Henry VIII in 1541.

The unexpectedly beautiful ruins still stand in a stretch of parkland known as Abbey Green. The neighbouring St Margaret's Church is a relative newcomer dating from the 12th century, but that’s rather fine looking too. One of those places that show you quite how many rural villages London has swallowed over the centuries.

The council uses the green as the setting for a classical concert every May. Other public events are sometimes held there, too. 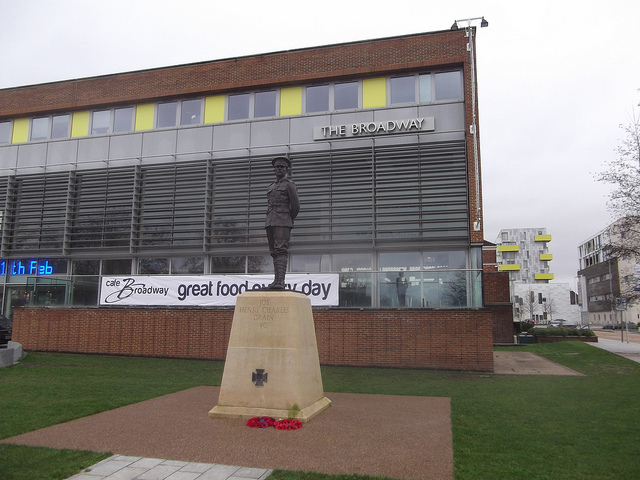 Barking & Dagenham is something of a cultural wasteland. The borough has just one cinema (a large, chain affair, tucked away in its south eastern corner at Goresbrook), and only one performing arts venue, too.

That venue, though, has done a very good job of plugging that gap singlehandedly. The Broadway Theatre’s diverse programme includes plays, comedy, talks, dance, and children's entertainment, and mixes shows by professional acts with those put together by community groups. Upcoming events at time of writing include shows staged by local school kids; a burst of passionate Latin dancing; some professional wrestling; a children's show presented by Derek the Duck; and an evening with Jimmy Cricket.

So well-loved has the Broadway become, in fact, that, when the local authority decided to scrap its budget at the end of 2011, the outcry made the national media. So far, the show goes on, thanks to support from the Arts Council, commercial work and charitable donations. 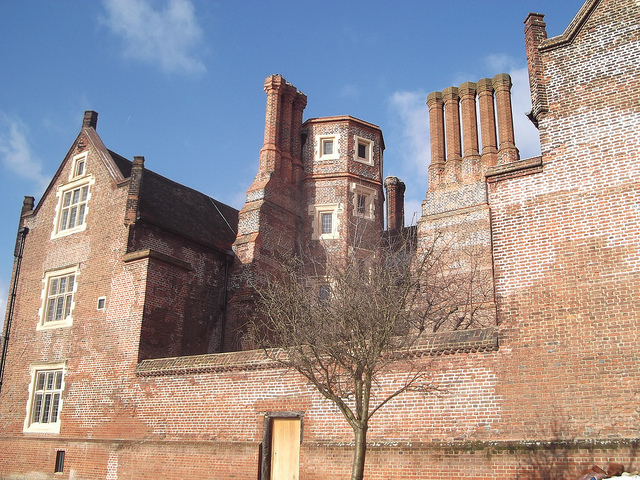 Hiding away in a run-down part of Upney, you'll find a quite stunning walled garden. Inside it stands Eastbury Manor House, completed in the 1570s and barely altered since. These days it's a National Trust property, containing Stuart-era art, an exhibition on life in the manor, and a turret, from which you can admire the roof top and despair quietly at the state of the streets beyond the walls.

The most striking thing about Eastbury is that it seems so unexpected. There's nothing in this rather drab part of east London to suggest Elizabethan connections, nothing in the surrounding streets to prepare you for it. You're in a housing estate besides an arterial road, turn a corner, and suddenly it's just there. And it is very, very lovely.

Just round the corner from Eastbury, you’ll find the arterial road immortalised in Billy Bragg's 1985 classic A13: Trunk Road to the Sea. But it isn't just an ugly slab of tarmac. It's also one of London's largest art galleries.

The 1997-vintage A13 Artscape is the result of a collaboration between the Highways Agency and 17 local artists. It features a dizzying array of landscaping work, including light shows, subways lit like spaceships and strange, curved, conical sculptures. The result is something unexpectedly magical in a frankly unlovely part of the capital.

Dagenham has historically been separated from Elm Park to the east by a vast swathe of land-filled wasteland. In the 1990s, the local authorities covered this with decent soil, sowed it with grasses and planted more than 50,000 small trees.

The result was a 208-acre nature reserve, a world of lakes and woodland that variously goes by the name of The Chase or Eastbrookend Country Park. Despite being deep in the suburban sprawl, this region feels like a genuine rural wilderness, and, in the unlikely event you fancy walking from Hornchurch High Street to the Ford Works, you can now do so without ever leaving parkland. At the south western end of this trek, you’ll even find a village pub, of sorts.

Until the interwar years, Dagenham was a rural idyll, a quaint Essex village surrounded by farm land. The arrival of the Becontree Estate scuppered all that, swallowing the place whole.

Remnants of the old Dagenham remain, though. Dagenham Village, as the area's now known, is one of those odd architectural juxtapositions that London throws up, an ancient village preserved in aspic on the outskirts of the world's largest council estate. There's a 12th century church, with vicarage and church yard; a war memorial; and a grade II-listed 18th century pub, the Cross Keys.

That is, sadly, about it: it's a historic conservation zone now, but as recently as the 1970s local developers were bulldozing ancient buildings.

London's culinary revolution, like so much else, seems to have passed Barking & Dagenham by. It has its fair share of chain restaurants and greasy spoons, but a distinct shortage of gastropubs and gourmet street food.

If you're looking for decent cheap eats, though, you could do worse than the Yaki Noodle Bar. It won't change your life, and the décor has a fast food lack of atmosphere. But it serves a wide selection of Chinese and Vietnamese dishes, the food is great, the portions generous, the service swift, and – the best bit, this – you can stuff your face for less than a fiver.

Conveniently enough, it's just over the road from Barking station, as well as the borough’s best watering hole.

After all that tiring urban tourism you probably fancy a drink. We can heartily recommend the Spotted Dog, an old school Victorian pub next to Barking station. It's a Davy's winebar, which is a little unexpected given the chain's normal focus on the plusher parts of town, and is rather nice. It's absolutely not to be confused with the Barking Dog (geddit), which is a Wetherspoons, and rather not.

We'd suggest you move quickly though: Davy's licence runs out this year, and last April its manager said it was struggling. "At this time, all options will have to be considered," he told the local paper. Last orders please.