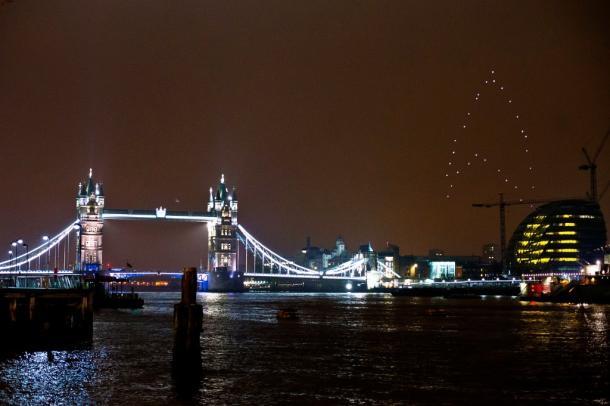 On Saturday night, to mark Earth Hour and simultaneously plug the upcoming instalment in the film franchise, 30 mini-drones formed the Star Trek insignia beside Tower Bridge.

The 'drones', actually LED quadrocopters, were positioned above Potters Field Park in the shape of the Starfleet badge. At 8.30pm the LEDs dimmed, along with the lights on Tower Bridge, before re-illuminating an hour later.

It's the second time Star Trek: Into Darkness has used London as a marketing prop; a poster released last year showed Benedict Cumberbatch standing before what appeared to be a ruined version of our city, circa the 23rd century. The film is released in the UK on 9 May.

Anyway, here's a video of the stunt: