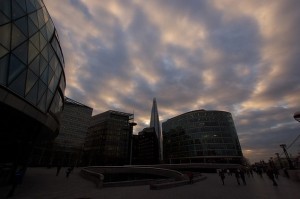 And so Londonist returns to City Hall for March's MQT, which happened to coincide with the budget.

After the fiasco of last month's failed grilling of London mayor Boris Johnson (in which he referred to London Assembly members as "great, supine, protoplasmic invertebrate jellies"), we wondered what could possibly be left to discuss. A lot, it seems.

Among the weary witnesses to this week's tussle between London Assembly members and the mayor was a group of primary school children, who, it has to be said, were better behaved than some of their elders in the chamber. We didn't have to wait long for the first spat between Boris and Labour AM Len Duvall over the latter's question about transparency of delegated decisions. We won't bore you with the details except to note that Chair Jennette Arnold stepped in to referee. Johnson's suggestion that she was abusing her role was firmly slapped down with a tart reply:

"I'm not going to take lessons from you about behaviour or chairing a meeting. And there I was thinking you were being Prime Ministerial."

As always, Johnson made a point of refuting the persistent PM rumours. But leaving aside the first few minutes, questions to the mayor (which you can see in full here) included air quality and the health of children, welfare reform, police targets and the London benefit cap.

The mayor's recent announcement of an Ultra Low Emission Zone got an airing, along with the suggestion that Johnson is simply kicking the issue into the long grass for his successor to deal with. Neither London Assembly Lib Dem spokesperson Stephen Knight or Labour's Murad Qureshi seemed to get the answers they were looking for on the subject.

Val Shawcross pulled Johnson up on his failure to use allocated regeneration funds and didn't get the answer she was looking for either, while the recent publicity over the Met's Sapphire unit came under scrutiny leading to the question of whether the public is being encouraged to drop allegations of other crimes to boost statistics.

Darren Johnson quizzed the mayor over the effect of benefit caps on London, sparking the seemingly never-ending argument about whether people on benefits should be able to live in expensive areas of the capital. Presumably unused to not being on the sharp end of an accusation of failing to read the background material, the mayor made heavy weather of criticising Darren Johnson for apparently missing the fact that London had successfully negotiated a nine month grace period for people who had lost their jobs.

Has the benefit cap brought down London rents? It would appear not, especially on cheaper properties, though the mayor claims around one in 10 landlords has reduced rents as a result and there was a whole cavalcade of discussion about the 'social cleansing' implications of moving low income families outside of London boroughs — the answer is apparently to move them all to Peterborough. As a result of this particular debate, Labour AM Tom Copley found himself on the receiving end of an impromptu interrogation from the mayor as to whether he was actually a member of the Labour party.

So what else happened? We can't report any further fireworks, kickings out, tantrums or imaginative adjectives for London Assembly members but there was a fair bit of sighing, hair-ruffling, accusations of question-evading and seemingly non-ironic reminders that Darren Johnson forgot something. Oh, and the cable car. As someone else once said, 'Plus ça change, plus c'est la même chose.'

In case anyone was wondering about the title of this post and whether or not they'd be able to chow down on a timetable or two if they got peckish while waiting for a bus, we'd like to reassure you that it refers to the mayor's plan to plant herbs at bus stops.

Watch the webcast of MQT here.