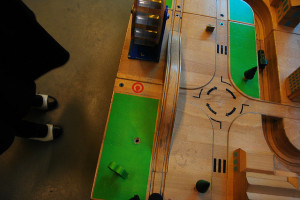 Sunday marks the 10th anniversary of London's congestion charge. There are still arguments for and against it; data shows that traffic levels are down 10% from a decade ago, but that journey times remain much the same. It's generally accepted that congestion would be far worse without it though the AA is making a fuss about the amount of money raised while speeds remain the same as 'horse and cart'. The scheme has certainly generated funds for infrastructure and road safety investment, though we showed this week that suggestions the charge hasn't kept pace with public transport is a bit unfair.

Perhaps more interesting is the Mayor's announcement this week of an Ultra Low Emission Zone by 2020. The congestion charge hasn't made much impact on London's air quality, which still regularly breaches regulations and leads to 4,000 premature deaths each year. On Wednesday, Boris Johnson said he's asked Transport for London to look at the feasibility of designating an area of central London where only low or no emission vehicles could drive during working hours. This is a great idea but, as always, caveats: a) it's still very woolly and currently only an idea b) Boris told LBC this morning that it wouldn't necessarily affect old cars, but be about deadlines for new ones:

What you can do is set a deadline of when new technology needs to be brought in and we'll work with car manufacturers and taxi companies.

which is a bit confusing, though could reassure these motorcylists c) Boris has said he'll stand down in 2016, so implementing this will be someone else's problem d) at the same time, Boris said he was scaling back phase 5 of the Low Emission Zone, that was supposed to control nitrogen oxide emissions for buses, HGVs and coaches. It will now only apply to TfL buses.

Diesel fumes are a major problem for London's air pollution; NOx emissions can aggravate asthma and other respiratory conditions and can react with moisture and other compounds to form tiny particles that get embedded in our lungs. This isn't the first time the Mayor has delayed parts of the LEZ. The third phase was postponed from 2010 to 2012, using a similar reasoning of saving businesses money.

Photo by Adam BRI Smith from the Londonist Flickr pool