A seemingly niche-interest commercial history turns out to be a fascinating account of one of our best-loved sweet companies and its East-End origins.

The Trebor Story by Matthew Crampton is a lushly illustrated book, beginning with the company's origins as a family business at the dawn of the 20th Century, through to its modern guise as a subsidiary brand of Kraft Foods. It's superbly put together, and even smells like one of the paper bags that used to hold our weekly quarter of cola cubes.

Trebor was a proper East End company, beginning as an idea borne over a chess match in Stratford and developing into a small factory in Forest Gate. This elegant building still exists, now converted into apartments.


The book quickly overturns a piece of trivia beloved of pub quiz compilers. Trebor, it turns out, did not get its moniker by reversing the name of founder Robert Robertson, but from Trebor Terrace, the name of the site it took on.

Over 150 or so pages, Crampton tells the story of a pioneering company. Long before others were doing so, Trebor brought in external consultants, gave women senior management positions, and set up what we'd now know as an HR department to look after staff needs. When the company was sold to Cadburys in 1989, management shared £21 million of the profit with its employees, including those who had retired, a munificence that would be remarkable today. 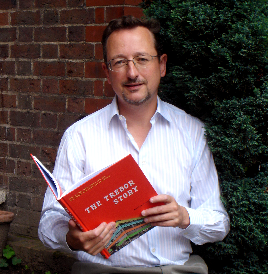 With its many anecdotes about working life during the war and early 20th Century, the book makes an excellent companion piece to recent book Sugar Girls, which set out the memories of the sugar workers at nearby Tate & Lyle. It will appeal to anyone interested in London's commercial history, or simply to those who want to know where their Extra Strong Mints and Softfruits come from.

The book ends with Trebor's modern identity — no longer an independent firm experimenting with new treats, but now a meticulously designed masterbrand of Kraft Foods. A two page list of products shows that Trebor produced 452 types of confectionary in 1936. Today, they make just seven. As Crampton concludes, referring to the distinctive modern packaging design:

"...one could argue that all that once made Trebor proud — its plants, its products, its history, its name — has been replaced by a simple, psychological association with a bright red star. Where once there is substance, now there is a shape."

A final nod to the future shows a map of the Olympic Park, with the old Trebor site and Tate & Lyle marked in the background. Part of the Park is to be named Sweetwater, in homage to one of the local firms (Clarnico) that Trebor acquired in 1969. A sweet legacy for a much-loved company.

The Trebor Story by Matthew Crampton is out now from Muddler Books, and can be bought from The Book Depository or Amazon (where the whole book is available in electronic preview, if you want to try before you buy).