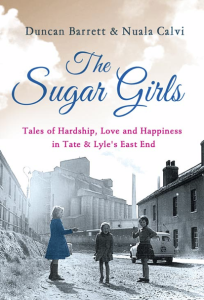 You may have heard of Henry Tate, the philanthropist who created the Millbank gallery that bears his name. He made his fortune by refining sugar in the marshy docklands of Silvertown. Nearby, a certain Abram Lyle ran a rival factory specialising in golden syrup. Incredibly, the neighbouring sugar magnates never met, but in 1921 and after their deaths, the companies merged to form Tate & Lyle, still trading from Silvertown.

A new book collects together the reminiscences of four factory girls who worked at the refineries in the 1940s and 1950s. Sugar Girls recounts the experiences of ordinary women living through extraordinary times: from the unprecedented hardships of the Blitz , to the Great Smog of 1952 that left thousands dead, to the fatal floods of the following year.

Throughout it all, the factories kept going thanks to the plucky spirit of the largely female workforce. But the book focuses less on these extreme occurrences and more on everyday human life. Factory flirting, jokes on the management, 'beanos' to the seaside and the covert courtships of a less permissive (but equally promiscuous) age are the mainstays of the book.

Authors Duncan Barrett and Nuala Calvi have crafted an unlikely page-turner, synthesising a pacey narrative from what we assume must have been a bottomless well of memories and anecdotes from the surviving sugar girls. It reads like a novel. By the end, we half-wished we'd lived through those impoverished, crater-strewn days. There is hardship here, for sure, but also an infectious levity and optimism so rare in our own times. A TV series surely beckons.

The Sugar Girls by Duncan Barrett and Nuala Calvi is out now from Harper Collins. An accompanying website includes photos and further material. Follow them on @the_sugar_girls. Buy the book here.