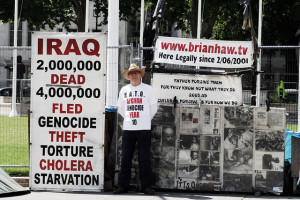 They've tried before and failed, but now a government has finally evicted the anti-war protesters from Parliament Square.

Police moved in last night under powers granted them in the new Police Reform and Social Responsibility Act (we reported yesterday on the changes that law makes to who's responsible for London's police). It covers the central garden – and footpaths, after protesters just moved onto the pavement following the Democracy Village eviction – and prevents anyone who isn't a "relevant authority" from using "amplified noise equipment" or any tent or structure designed for sleeping. Which sounds similar to tactics the City of London Corporation are using on Occupy.

The powers that be have been trying to kick protesters off their doorstep since Brian Haw set up camp in 2001, including the dreadfully hamfisted Serious and Organised Crimes and Police Act that Haw turned out to be exempt from. Maria Gallastegui and her police box will remain, protected by an injunction. Two people were arrested during last night's operation.

Departing head of Westminster Council, Colin Barrow, produced the usual mealy mouthed lines about tourists and local people not being able to enjoy the square because of protesters, but we've often thought the camp was but a minor problem on the edge of what is basically a massive traffic island. A couple of months ago, the Hansard Society described the area as a "national disgrace... noisy, polluted, inaccessible place, seething with traffic". If politicians really want to improve it, how about reviving the pedestrianisation plans?