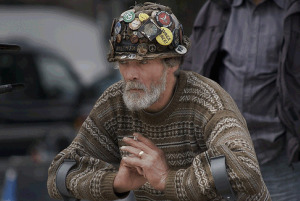 Image by Peep O'Daze from the Londonist Flickr pool
He's survived attempts to get rid of him before and had his protest reduced to a 3m square pitch, but now David Cameron's planning to have another go at evicting Brian Haw. As we're sure you hardly need reminding, Haw's been protesting in Parliament Square over Iraq since 2001, but if the Tories win the next election Cameron plans to have him removed, saying:

and complaining that Haw makes the Square look a bit tatty. Has Cameron been walking round his workplace with his eyes shut? Does Haw's camp really make any difference to that benighted traffic island? If Davey really wanted to make an aesthetic difference to the Square he could put pressure on Boris to put the pedestrianisation plans back into action.

Of course, the real reason politicians don't want Haw around is because he's a very public reminder of how their decisions have helped make a total balls-up of the war on terror. It would never do to have politicians living in a world where their actions have consequences.