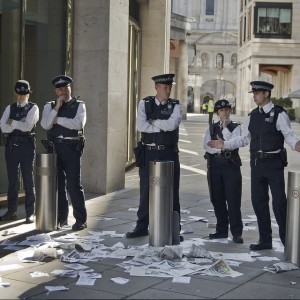 BBC London has conducted a survey into Londoners' opinions on the Met and August's riots, and found that 77% of us think the police are doing a good job, though that fell to 56% when asked if the Met did a good job during the riots themselves.

A comparison poll run five years ago put London's faith in its police force at 74%, and that was before the phone hacking scandal with its inference of corruption and certainly before a bunch of kids ransacked JD Sports. 22% are very confident and 52% fairly confident that the Met can protect the city during any future civil disturbance (so long as they remember to call in reinforcements earlier?) and around half of us think social networking sites should be blocked during riots.

Slightly worryingly, 72% think the police should be allowed to use water cannon (have the people who answered that question seen what water cannon can do to people's eyeballs?) and 62% think civilians should be allowed to use violence to protect their community. This has possibly been encouraged by stories of the Dalston shopkeepers - but they didn't actually clout anyone, just "picked up sticks and were waving them threateningly".

The new Commissioner wants more officers on the streets, not just during periods of unrest, which always helps to boost confidence in coppers. But he'll face challenges with that, as police numbers are cut over the next few years.

Photo by Spencer Wilton from the Londonist Flickr pool