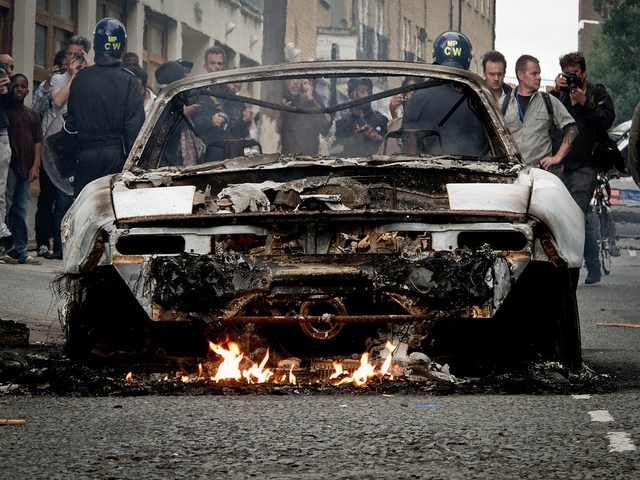 Holy fuck. Anyone watching the news last night saw area after area of London get smashed up, looted and set on fire; rioters moving through postcodes and shops with apparent impunity. Eyewitnesses on BBC News reported, for example, looting in Clapham Junction going on for more than an hour, with a handful of police initially attempting to block a road but eventually giving up.

Police did attempt to form lines in certain areas but the mob moved so quickly and was so large that it is completely fair - and no criticism - to say the Met were utterly overwhelmed, having to bring in forces from surrounding counties to help them cope. Temporary Commissioner Tim Godwin says CCTV footage will be published in an attempt to identify individuals, but this might be interpreted by trouble-makers as 'cover up and you won't be caught'.

As a commenter on the Guardian eloquently pointed out, law and order isn't the responsibility of the police and politicians, it's the responsibility of all of us, and hundreds (thousands?) of young people in London have unilaterally decided to ignore the law. And the thing is, when the police can't keep up with them, when shops are left unprotected for leisurely looting, when buildings, cars and buses are set on fire and allowed to burn before the fire brigade can get there... right now, these rioters have removed their consent to be governed. In effect, the law doesn't apply to most of them. And that's scary.

What to do? This can't carry on until there are no more shops left to empty. Boris Johnson and David Cameron are back today, the latter due to chair a meeting of Cobra, the government's emergency committee. We have no idea what constitutes a legal state of emergency in the UK but this situation must come pretty damn close, and the prospect of having the army on the streets is one that the government must be considering. Given what happened last night, it may not be a bad idea. The post mortem of what made these people shuck off all regard for law, order and common decency can come later (it's easy to dismiss them all as morons, but there have been plenty of previous disturbances in London without escalation on this scale. Something's different. Or weirder) – right now we need this city making safe again.

Photo of the aftermath in Hackney by Sven Loach is almost here... from the Londonist Flickr pool