Graffiti: Tox Could Go To Jail

By M@ Last edited 122 months ago
M@ Graffiti: Tox Could Go To Jail 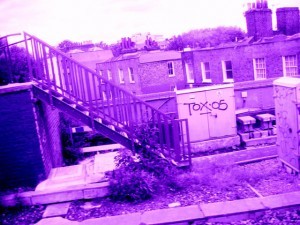 One of London's most prolific taggers has been convicted of criminal damage. Daniel Halpin of Camden, better known as Tox, has at least a decade of defacement to his name. His tag, which simply states 'Tox' followed by the last two digits of the year, can be seen all over the country and particularly on London's rail networks. "I don't know where you can't see a Tox tag," said a London Underground manager. "They are in places even I don't know how to access."

The 26-yearold Halpin was remanded in custody at Blackfriars Crown Court after being found guilty of a spray of offences. Halpin protests his innocence, claiming he 'retired' in 2005, and any subsequent scrawl is imitation. He now awaits sentencing with fellow writers Host and Rigz.

The case had a celebrity expert witness. Street artist Ben 'Eine' Flynn, whose work hangs in the White House and covers just about every shutter in E1, was brought in to comment on Tox's actions. "Incredibly basic" and lacking "skill, flair or unique style," was his assessment.

The case once again raises the fascinating issue of graffiti and the law. Many (though not all) people would make a distinction between the repetitive tagging of Tox and his ilk, and more crafted pieces by the likes of Roa, Banksy and Eine. But the law does not have that luxury. If private property is defaced, the penalty should not be set on the basis of perceived artistic merit. The prosecutor in this case is quoted as saying "He is no Banksy. He doesn't have the artistic skills, so he has to get his tag up as much as possible". That comment might have been aimed at explaining Halpin's behaviour, but you can't help wondering...what if he were a Banksy?