As the science fiction exhibition opens at the British Library, and the Bishopsgate Institute obsesses over London in peril, we count down the best fictional accounts of a devastated capital. What feat of destruction should occupy the tenth spot in this truncated list? You decide.

9. After London, Richard Jefferies (novel)
Some kind of undefined cataclysm causes everyone in south-east England to go Medieval. Non-dashing, tedious hero Felix decides he’s had enough of village life and, after a monumentally distended and pointless preamble sets out in a canoe to explore the world. There’s not much there. Swamps and deltas and really pig-thick princes whose equally moronic generals are easily outwitted by our suddenly charismatic Felix. But then he stumbles across the ruins of London and it’s like someone else is writing, possibly HP Lovecraft. The tempo and mood change suddenly and we enter a land poisoned by some unknown malaise, which sounds a lot like nuclear radiation — 60 years before the first atomic bomb. The book goes incredibly shit again after that, but that section is a rather special landmark in early sci-fi. Oh, and the author’s face also predicted the physiognomy of Nicolas Cage. What a visionary. 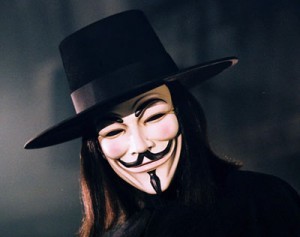 8. V For Vendetta, Alan Moore (comic, film)
We’re in the aftermath of a global nuclear war. London remains intact, mostly, until a mask-wearing anarchist and disciple start blowing up all the nice buildings: Houses of Parliament, BT Tower, Downing Street, Old Bailey... A superb Alan Moore comic turned (as usual) into a mediocre film adaptation. The story maintains currency though the use of the protagonist’s Guy Fawkes mask by anti-Scientology demonstrators.

7. The Book Of Dave, Will Self (novel)
London is destroyed by a flood and rebuilt as New London. The apocalyptic deluge plays little part in the book, however. Far more interesting is the before and after, whereby the misogynistic writings of a cab driver (titular Dave) are uncovered by the flood survivors and used as a guiding text for society. The ‘mokni’ language, based on a mix of Cockney and early 21st Century slang, is both infuriating and enchanting.

6. Flood, Richard Doyle (book and film)
One endless <strike>roller-coaster</strike> log flume of destruction and disaster. A plane crashes at City airport. A fuel tanker smashes the terminal at Coryton and causes a slick of burning oil to head up the river. Everyone on the Dartford Bridge roasts alive. The Thames Barrier gets hit by a ship. The London Eye collapses into the water. A book of Grade A devastation. The film sucks worse than Charybdis on bagpipes. 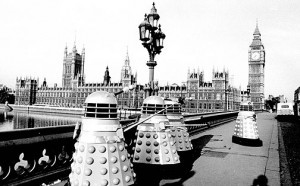 5. The Dalek Invasion of Earth (TV)
Oh, those hapless Daleks. So many times have they tried to tame or destroy the Earth. Always they fail, even when the ineffectual William Hartnell stood in their way. This early Doctor Who (1964) six-parter marked their second screen appearance, and the first of many fruitless sojourns for Dalek-kind to London (at least in episode chronology if not temporal chronology). Many of London’s most iconic locations (Traf Square, Albert Memorial, Battersea Power Station...um...Kew rail bridge) make cameos. The compelling if bloated story was rehashed for a forgettable Peter Cushing film adaptation, and the BBC recently released an online game with many of the same elements.

4. The Day The Earth Caught Fire (film)
Nuclear tests somehow knock the earth towards the sun, severely affecting London’s climate and putting sunbed manufacturers everywhere out of business. The only remedy, for some reason, is to detonate many more bombs in Siberia. The hacks of Fleet Street have a field day, as Fleet Street itself becomes a desert. A strange and menacing film with no respect for the laws of physics. 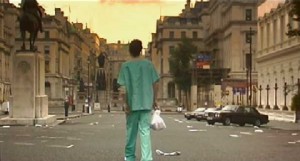 3. 28 Days Later (film, 2002)
Some kind of viral malarkey causes everyone to go rabid, except for those who were lucky enough to be in hospital in a coma, or some such. Danny Boyle’s 2002 movie was a major landmark in zombie lore, despite a complete absence of zombies (they were actually very, very ill humans but...you know...NHS funding cuts and all). London looks stunningly bleak in THAT scene, with the slow-burning Godspeed You! Black Emperor track. In fact, it’s a flawless movie until the cast decide to leave London (the fools) and encounter a hammy Christopher Ecclestone somewhere up north.

2. The War of the Worlds, HG Wells (novel, films)
Some kind of Martian drought malarkey causes our planetary neighbours to invade Earth. This is must-read stuff for anyone pondering the capital destroyed...let’s just throw some quotes out: “Here I came once more upon the black powder in the streets and upon dead bodies. I saw altogether about a dozen in the length of the Fulham Road...I came into Oxford Street by the Marble Arch, and here again were black powder and several bodies, and an evil, ominous smell from the gratings of the cellars of some of the houses...The dome of St. Paul's was dark against the sunrise, and injured, I saw for the first time, by a huge gaping cavity on its western side." If only they’d make a film version set in the country of origin. 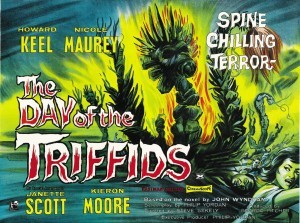 1. Day of the Triffids, John Wyndham (novel, film and TV series)
Some kind of weird meteor shower malarkey causes everyone to go blind, except for those who were lucky enough to be in hospital with their eyes bandaged, or some such. Meanwhile, plantations of massively dangerous GM crops run riot, picking off their suddenly helpless human cultivators. A double disaster! London is the chief battleground of this John Wyndham novel, with notable scenes in St John’s Wood and round Senate House. A recent BBC adaptation missed the mark, but offered a rare chance to see Eddie Izzard underperform.