The History Of King's Cross And St Pancras On One Billboard 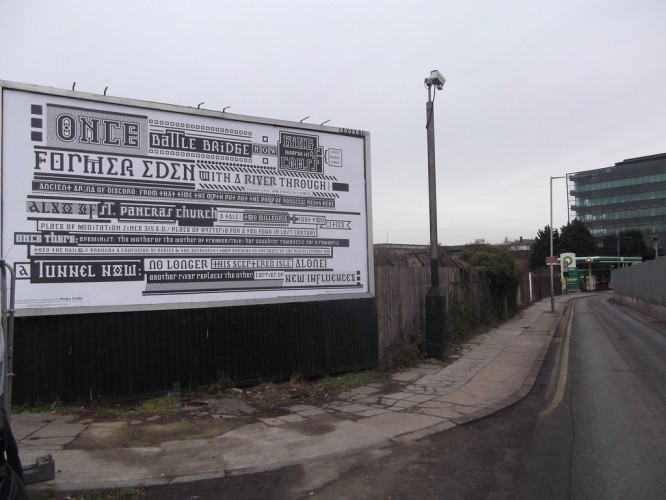 Walking through the King's Cross railway lands yesterday, we chanced upon what at first appeared to be a giant ransom note, cut and pasted from other billboards. Situated on Goods Way, the sign offers a potted history of this ever-changing area in that semi-cryptic tone once favoured by Kenneth Kendall on Treasure Hunt - and in a garish ensemble of fonts.

All the local legends are represented, from Boudica's bullshit burial to back street Beatlemania. Click through on the links in our transcription below for a collection of trivia that few other parts of London could muster.

Once Battle Bridge Now King (George iv)'s Cross (since demolished). Former Eden with a river (called Fleet, now hidden as a sewer) through it. Ancient arena of discord: from that time the myth but not the body of Bodaceai rests here. Also of St Pancras church a tale of two millennia not just two cities. Place of meditation since 315 A.D. / Place of hysteria for a Fab Four in last century. Once there: a feminist: the mother of the mother of Frankenstein / her daughter romantic for a romantic. Then the railway brought a confusion of bodies & the architect's tomb brought us the shape of the red telephone box. A tunnel now: no longer this sceptered isle alone. Another river replaces the other, carrier of new influences.

The work, commissioned by Minnie Weisz Studio, comes from typographer Jonathan Barnbrook and will remain on Goods Way for around a month. Barnbrook is a graduate of Central St Martins, whose new facilities will open in the old Granary Building, across the canal from this billboard, in Autumn 2011. Meanwhile, the artwork on the sign will change periodically, with the next poster appearing on 9 February.