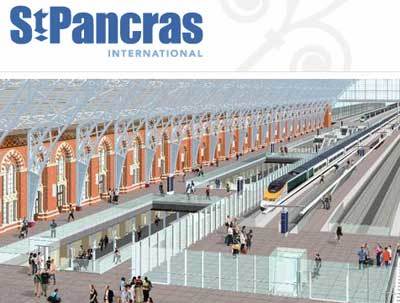 Updates from a Londonista at today's Integrated Volume Testing at St Pancras International, the new Eurostar terminal. (A sneak preview of the new station before it opens on 14th November, with Eurostar moving from Waterloo overnight.)

8.00. It's quite a privilege to be here and get a sneak preview of the place. But they'd better have coffee.

8.30. The first queue of many - most of the participants (300 of us?) queue up for badges and packs as ours didn't arrive in the post. I hope Eurostar tickets do better in the postal system. There's a disproportionate number of train-spotter types here, and old people.

9.30. And so it starts. The automatic ticket machine doesn't work with my ticket, but the X-ray does. Passport man wishes me bonjour so that makes it all OK. I go through to the lounge-y bit.

9.40. The very first train... ...is late. My ticket proudly states 'Paris Nord'. I wonder how far we will actually go? Weak coffee and mini-croissants served to keep everyone happy. It just about works.

9.45. The station is still not quite ready. Parts of the new station use red brick to match the hotel architecture, and there is a lot of glass used everywhere. Any bits of metal (such as columns) are painted white, and the lounge has a wooden floor.

9.50. The train's not far away but 'technical problems' have kept it stuck outside the station. The crowd is amused. I like the announcer's slightly knowing/weary tone of voice. This was not rehearsed.

10.10. Still no sign of the first train. The staff are looking embarrassed. I've got 3 journeys to Paris Nord to make this morning, but it's not looking good...

10.20. Train is now just shy of an hour late. Unhelpfully, the Public Address system just crashed. So there's a man with a loudhailer wandering around and feeling silly.

10.30. Onto the station concourse, which is very airy and attractive. The huge roof goes on for ever and everything feels very big, modern and European. I love the new St Pancras International logo - which mixes a modern feel with a nod toward the gothic architecture.

10.32. Now on board and nipping through a bit of North London. In posh class too, hoorah. The rail bends right (East) almost immediately so the view is of the Gherkin and the BT tower.

10.40. Eurostar CEO comes over the train tannoy system. Apologises for delay, which wasn't planned. But they learned lessons from it.

10.42. The train just stopped and all the power and lights shut off. It will now return to the station - "please do not try to get off the train here" says the announcer, for the stupid passengers.

10.43. Already headed back to St Pancras. The gothic architecture of the hotel at St Pancras is illuminated in the distance by pale sunshine breaking through the clouds. Nice.

11.20. Chatted to the Eurostar CEO on the platform, who seems happy with the day so far. Boarding the trains is much easier now there are more travelators than there are at Waterloo.  11.25. Home office check my passport and I'm allowed, er, back in to the country. Phew.

12.06. Second journey 'to Paris'. Late again - but this time it's part of the plan, using the excuse that 'no train crew has turned up' to see what happens when the schedule is muchked up and how two crowds of passengers interact for two trains leaving at once.

12.10. I get the same seat in business class on this train. Lunch, in a paper bag, is decidedly NOT business class. Cheese and onion hula hoop, anyone?

12.15. Realise that this is part of a bigger test than just St Pancras International, some people are also apparently getting on at the new station built at Ebbsfleet and coming here. Gosh. The train smells a bit of cheese and onion hula hoops now.

12.45. The novelty of this has worn off a little, but it's still quite fun to be rattling around a train station having a look in all the nooks and crannies. The travellers all have different itineraries, I think some are off 'to Lille' or 'to Brussels'. So I think I win with Paris. Wandering around you get frequent blasts of noise from last-minute drilling, and the smell of fresh paint. You catch old people discussing how lovely everything is, and train enthusiasts talking about narrow gauge. I just want chocolate now.

12.50. The sculpture of the couple hugging looks surrounded by scaffolding but is rather impressive nonetheless. Bigger than I thought. Last journey to come, then we're done. Need to nab chocolate is now almost overwhelming.

13.20. Chocolate sourced, phew. Notice that Eurostar staff (Eurostaff?) seem to huddle in distinct linguistic groups to chat when they're not working. English one side, French the other.

13.30. With eurostar so environmentally friendly, there are a few questions to answer - why aren't the lamps across the platforms LEDs? How come the huge long travelators are moving the whole time rather than just switched on when needed? One is powering away in front of me but it's out of use.

13.32 Love the desks where you can plug in your computer. I hope they install wi-fi. No sign of 'Europe's Longest Champange Bar' but apparently that's still being built. Priorities, please!

13.35. So, we're all done and dusted. "Thanks for your participation, the exercise is now over."

Bizarre way to spend half a day, but inisghtful for me and Eurostar get to make sure everything works - or at least that when it does't, it can at least be sorted. The only glaring problem apparent to all those taking part was the fact that security queues were long and took ages to pass through - which meant the queue disrupted check-in.  Back in 1999 this Londonista went to the millennium dome on a similar tyre-kicking exercise. Today the loos worked (a big change from last time) and the place feels like it will be more of a success. Mind you, I thought the dome was great so what do I know?

Image of St Pancras taken as a screengrab from www.stpancras.com