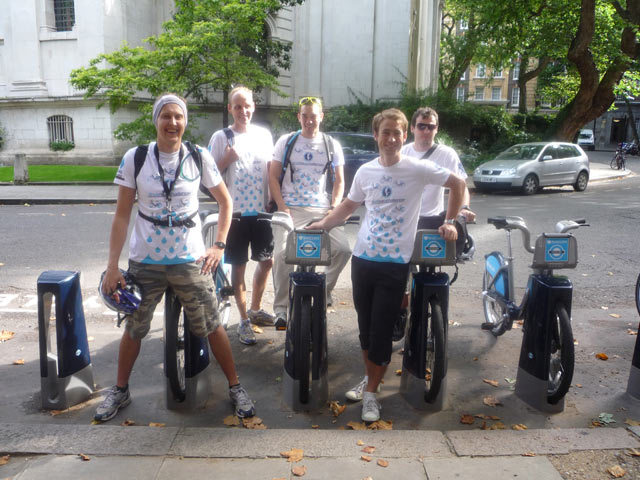 On September 2nd, two teams attempted to cycle to every one of the Barclays Cycle Hire docking stations within 24 hours. This is the first time it had ever been tried and only one team made it - and not without incident.

According to Transport for London, there are 336 docking stations live at present, meaning the teams had to visit one docking station approximately every four minutes during the 24 hours. The challenge raised money for Frank Water Projects, a charity that funds sustainable clean water projects in developing countries across the world.

It was always going to be difficult despite sponsorship and support from www.findmeachallenge.com and www.GoingGoingBike.com. The bikes weigh 23kg, the route is almost 100 miles long, there would be no sleeping and, inevitably, teething problems forced one of the teams to drop out when some of the keys wouldn't work.

Once the technical gremlins had been sorted they set off at 11am, waved off by Kulveer Ranger (Boris' Transport Adviser) who happened to be at the start point for a TV interview. A day of bike swapping followed interspersed with police encounters, drunks demanding their bikes and one lucky girl even got a lift on their handlebars when she didn't want to walk home!

Patrick Bishop, John Levick and Ben Montgomery completed the challenge in an impressive 20 hours and 32 minutes. Although exhausted, Patrick was elated saying "it was an amazing experience and proves that a bike is the best way to see London."

You can congratulate them by donating to FRANK Water Projects via theirJustGiving page.