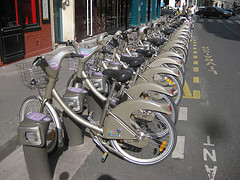 Let's use a pic of the Paris version, for the sake of variety.

The new cycle hire scheme has prompted the greatest burst of creativity since God stroked his beard and decided to 'let be' that whole 'light' business. Not a day goes by without some new data mashup, endurance challenge, stunt riding or news story related to the initiative. Keeping up with developments is like pursuing Chris Hoy uphill on a Boripede (the latest coinage for a Boris Bike).

Today, we came across the London Cycle Hire 24Hr Crazy Challenge which is, indeed, crazy. Its proponents will visit every docking station in London (that'll be 400) within one day, with sponsorship going to charity. More on the project on their Facebook page.

TfL and their blue-liveried banking bedfellows are hoping to squeeze yet more creative juice from the scheme with the launch of a film competition. They're asking the public to 'submit a short film of three minutes or under that can take the form of a documentary, an animation or drama' to celebrate both the bike hire and the new cycle superhighways. The best films will be screened at the International Bicycle Film Festival, with cashy prizes on offer. Clearly, they haven't seen the Open Letter to Advertising And Marketing doing the rounds today.