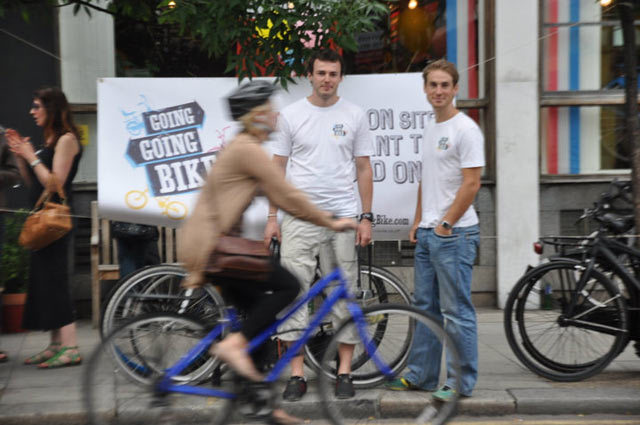 While in the past few years cycling may have officially become cool, the process of acquiring a second hand bike has decidedly not. Typically, potential buyers needed to trawl through pages of confusing online listings before finding a suitable model - and on closer inspection, that apparent bargain buy often turned out to be from a suspect seller. Two London cyclists are hoping to change that with the new online auction site Going Going Bike, which launched at the Look Mum No Hands! cycling cafe this week.

Frustrated with the experience of trying to find a second hand bike, Andrew Nethercot, then a City lawyer, had the idea of creating a specialist, legitimate online cycling marketplace, and joined forces with his friend James Johnson to set the project in motion.

The pair, who have known each other since childhood, aim to establish a well-organised site where people can buy second hand bikes and accessories in confidence that they are dealing with genuine sellers. To help cyclists share advice and information, alongside the marketplace GGB also has the ambition of developing a community and discussion area - and in the going going bike blog they have already made a promising start.

As the centrepiece of the launch, people who had cycled to the event locked their bikes together in a bike daisy chain, which eventually totalled 55. A small hitch occurred as the owner of one link in the chain failed to emerge to unlock their bike, but the incident did little to detract from the positive mood on the night. The fluorescent yellow GGB T Shirts received by guests (who included both established and aspiring cyclists) contributed to the party atmosphere, with many people expressing the view that the site was addressing a real need.

Among the attendees was Kevin Bird, whose company Bike Revolution will play a key role in working with the site to help fight bike theft. Besides enabling owners to register their frame number on the Bike Revolution site for free, the not for profit organisation is also pioneering 'Pulse ID' tags, which can be scanned using smart phones to immediately determine the ownership of any suspect bike. Using Twitter and Facebook to get the word out, the process of tracking down a stolen bike can be accelerated to devastating effect (the record is apparently 18 minutes). Bike Revolution will be working with GGB to certify bikes with the 'Prove It!' assurance of legitimacy.

A contingent from the Met's Cycle Task Force were present and gave the scheme the thumbs up, saying that any initiative that might help to prevent the sale of stolen bikes "has got to be a good thing".

We'd say the same thing about the Going Going Bike site overall. Cycling is a great way to experience London, and recently the city has made some significant steps towards becoming more cycle friendly. Through getting more people out on their bikes and tackling the scourge of bicycle theft, this new venture has the potential to play a big part in developing that trend.