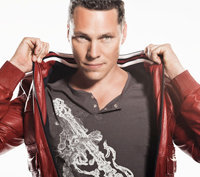 Victoria Park has had a great summer so far. On top of winning a Lottery grant which will go towards its £12m regeneration plans, it hosted the popular and newly-expanded Lovebox and this weekend it held another three-day feast of music with Field Day on Saturday, the Underage Festival on Sunday and kicked off in style on Friday with a show headlined by Aussie dance/rock band Pendulum and global superstar DJ Tiësto.

For those seeking an indoor alternative to these two, the Mixmag/Don’tStayIn tent featured ones-to-watch The Japanese Popstars from Northern Ireland, the effervescent Blamma! Blamma! DJs and, top of the bill, ex-Radio 1 DJ and Ibiza favourite Eddie Halliwell showed why he was voted by Mixmag as DJ Of The Year.

On the main stage, Pendulum gave a flawless live performance which demonstrated why they thoroughly deserved the critical and popular praise heaped on them when they erupted onto the music scene five years ago with their debut album Hold Your Colour. Although their rock influences are ever-present (and ever-growing), the drum&bass elements of their songs are more pronounced live than on their albums. The many fans who were disappointed with the more overtly rock-based production of In Silico and Immersion should see how the newer material is interpreted live.

Tiësto (possessor of the most famous umlaut in music since Motörhead) is no stranger to Victoria Park as he was the first DJ to headline this venue last year. Many of his international fans - including some around us who had come from Holland and Turkey - had followed him here to see him play for a relatively short set of three hours which contained much of his most recent album Kaleidoscope as well as remixes of previous tracks that he has released or worked on. As the early evening became dusk and finally night, the crowd lapped up numbers like Escape Me (his collaboration with CC Sheffield) and Knock You Out (featuring the lush vocals of Emily Haines). Rather than relying on stage gimmickry like DJ Shadow, Tiësto has a spectacular video display which was just as well: the man himself is a tad uncharismatic even when not working the ones and twos and there were no screens around the stage.

Overall, we preferred Pendulum's shorter and sharper set to Tiësto's balearic beats session but, if this event is repeated next year, we would love to see Eddie Halliwell on the main stage.