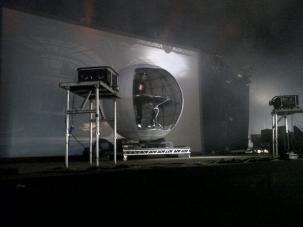 Festival season is well and truly here. This weekend, the barclaycard Wireless Festival took over Hyde Park. On Friday, the festival was kicked off by P!nk, the Temper Trap, Gossip, Plan B and the Ting Tings amongst others. Between its P!nk Day and Jay-Z Day, Saturday was Dance Day with a wide range of mainly British and American acts doing their level best to keep the audience's bodies moving (in a good way).

Suspicions that the high temperature outside would produce lethargy amongst the festivalgoers were dispelled early doors when Sub Focus rocked the Pepsi Max dance tent with a short and sweet set aurally not a million miles from a band they supported recently, Pendulum. Following them, Jamie Lidell brought the tempo down a little by brandishing his trademark soul/funk crossover with a dollop of doo-wop guitar. Lidell was followed by veterans of the British dance scene, UNKLE who came ready to promote their latest album, Where Did The Night Fall, with a full band. They warmed up the audience to fever pitch before their ex-collaborator DJ Shadow (pictured) took to the stage as the tent’s headlining act. It was a standout set from the man who revolutionised the music scene with his sample-based album Endtroducing. in 1996 and influenced many of the acts at this festival. His arrival on stage was probably the best of the day, cocooned as he was within his own DJ booth.

Wireless Festival's Third Stage tent showcased a number of several up and coming acts. New Young Pony Club reminded us of what a modern Elastica might have been like while headliners Magnetic Man proved how infectious dubstep could be in a live environment. The best received act, though, in this tent was Darwin Deez. Like all good acts, he invites and defies comparisons. Imagine, if you will, songs with the lyrical deftness of Cake sung by the Strokes’ Julian Casablancas. Add to the mix a look inspired by Weird Al Yankovic and finish off with some between-songs kooky dance routines that Napoleon Dynamite would be proud of set to 80s numbers including the Pointer Sister’s Automatic and the Bangles’ Dance Like An Egyptian.

On the Main Stage, Missy Elliott and her entourage arrived late, promising the hot and sweaty crowd some “sex education” before launching into anthems “One Minute Man” and “Get Ur Freak On”. More open-air rap ensued with Snoop Dogg, the Doggfather crew and a dash through his hits followed by 2manydjs who took to the stage manning their ones and twos within what looked like a converted 1950s dining booth. Wearing white dinner jackets (DJs in DJs, whatever next?), these masters of bastard pop treated us to a set which began with straight breakbeats infused with feedback before seguing into mashups featuring everyone from ABBA to MGMT.

The day’s headliners LCD Soundsystem generated some headlines of their own after a festivalgoer threw a bottle in their direction. Deservedly furious, singer James Murphy responded "Hey anonymous asshole throwing stuff, do that to my face and I'll kick your face in. And then I'll pay your medical bill." That unpleasant incident aside, the moshing down the front was fierce but fun as hits from all three albums were expertly executed.