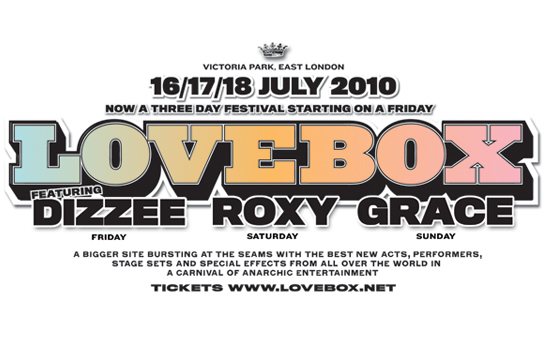 Last year we took a leisurely debut trip to Suffolk's Latitude festival, listened to Stuart Maconie interview lots of people, watched the Pet Shop Boys throw colourful boxes around, and stared open mouthed as the rain vanished into the peat rather than building a fountain of mud. This was our festival. We'd found it and we were coming back every year. It didn't matter that Lovebox was on the same weekend and only 20 minutes away, Suffolk was where it was at. Then Lovebox announced it's line-up and we're back in love with Victoria Park.

Extended this year into a 3 day festival, we think this is the first time curators Groove Armada haven't booked themselves as the headline act. Instead it's a triple whammy of Dizzee Rascal, Roxy Music and Grace Jones and a supporting cast that well and truly makes the festival just as big as Wireless has become. Friday's line-up includes Chase & Status, Noisettes, Ellie Goulding, Mystery Jets, Chew Lips, Crookers and Toddla T supporting Dizzee; joining Roxy Music on Saturday we'll enjoy Mark Ronson & The Business, Paloma Faith, Rox, Empire of the Sun, Yeasayer, and Tim Westwood in the NYC Downlow tent while on Sunday prepare to look dashingly arty as Grace Jones leads a line-up that includes Hot Chip, Peaches, Hercules & Love Affair, Hurts, Chromeo, Cut Copy and lots of our favourite London clubnights

Expect many more stages and acts to be announced. In the past Lovebox has always looked alright, but this year it looks bloody amazing. Tickets are 1 day/£45, 2 days/£80, 3 days/£95 and are available with lots more info over at the Lovebox website.