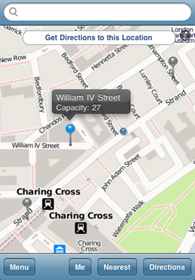 Screenshot from London Cycle App
Just one day now before the cycle hire scheme launches, and already the question is being asked: what's the best mobile app to use?

A month ago, TfL urged app developers to get on the case and, and they've responded strongly. The main contenders for the iPhone are Fiplab's London Cycle App, which is available to download now, and Cycle Hire App, which is awaiting approval from the gatekeepers at Apple HQ but should be ready shortly.

The London Cycle App is a pretty impressive program. It's quick to load, and presents a map of the city, with the numbers of docking stations grouped into grey circles when zoomed out, meaning screen clutter is minimal. The app uses your location to determine the nearest docking station, and shows directions on how to get there. It's also got a decent route finder, and has separate sections on safety and cycle riding tips. It's all very nicely presented, and the rival Cycle Hire App will need to offer something quite special if it's to win people over.

In the App Store there's also London Cycle Hire, which is a little on the slow side (at least when used on a 3GS phone) and has quite a messy user experience, with a hideous sea of coloured blobs overlaying the familiar Google map; once zoomed in, however, the experience is a lot cleaner. And if you're willing to palm off 59p you'll get London Cycle, a very basic offering with nothing that's particularly worth forking out money for.

One thing all these apps lack, of course, is vital information on how many bikes are actually present at each location (they show the total number of docking stations instead). The reason is that TfL are yet to make the API for this data available. Once it's ready, they will no doubt be updated swiftly, but until then there's little way of knowing, once you've shlepped to the station, whether any bikes will be there.

Unless, of course, you have a phone running Google's Android operating system. An Android-only app has pre-empted the bike availability data through a neat crowdsourcing trick. The Cycle Hire Widget, developed by Little Fluffy Toys, does the same as its rivals in directing users to the nearest docking station; however, it also prompts the user (once they're in the vicinity) to report back on how many bikes are available. Its success will, of course, be directly related to how many people use it, and once TfL release the requisite API, the advantage will be null and void; but in what could be a fiercely contested app war, this could be a useful head-start.

Another Android-exclusive app, London Cycle Hire (we're beginning to resent the lack of original names for these things) has a nice feature that times the length of your ride and presents a cost estimate; given that the bikes are free to use for less than half an hour, this could be quite useful.

Our recommendations: London Cycle App for the iPhone, and Cycle Hire Widget for Android. Lacking a Blackberry we weren't able to test out apps on that platform, but drop a comment if you've tried one out. All of the apps are available via the App Store or Android Market.

A review of the bikes

What's in the Cycle Hire pack?