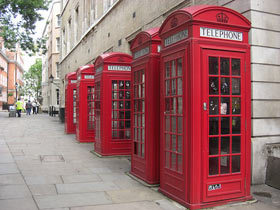 By John19701970 via the Londonist Flickrpool
Last week’s Jazz was the final proper chapter of Len Deighton’s London Dossier. Aww. But Len’s not done yet. He provides an addendum covering a range of general topics of potential use to the visitor to London and now, hopefully, of interest to us.

He kicks off with telephones and radios. ‘Not even the most fervent Anglophile could describe Britain’s telephone service as anything but appalling,’ he writes helpfully. ‘When you are forced to use the phone, handle it carefully and dial slowly and precisely.’ The whole process of trying to make a call was long and frustrating. ‘It’s possible to spend hours trying to get the operator.’

Operator? It’s difficult to recall the last time we had cause to speak to an operator, but it was virtually a daily thing 40 years ago. Then there was DIR to find someone’s number, ENG to report a fault and INF to get information. INF must have been a bit like Google or Ask, we suppose. Hang on - there was an ASK! It was for the day’s main tourist events, apparently. You dialled ASK 9211 to hear them in English, ASK 9212 for French and so on.

There were recorded updates for lots of things. Cricket scores, weather forecasts, traffic conditions; all costing a couple of pence back then; a few more pence today. An early version of Spotify started around then, too. It was called Dial-a-Disc. The sound was shit and with just one song per night the choice was a bit, well, non-existent.

As was Yellow Pages. If you needed the name of a local chimney sweep, Nehru jacket retailer or the nearest branch of Timothy Whites, you had to visit the post office and asked to see the ‘buff book’. There’s the day gone, then.

Radio offered just three BBC stations (Radio 1 began shortly after the book was published) and a few pirate stations: ‘The music is London 1967 but the chat is Greenwich Village 1945’.

What London lacked in broadcasting choice it made up for in quality. ‘A visitor truly interested in getting the taste of Londoners’ London should see and hear some TV and sound broadcasting,’ he suggests. ‘The best TV programmessurpass any television I have seen abroad.’ This was written before Homeboys from Outer Space, obviously.

His next section dealt with advice on which maps and guide books to buy. Maps ranged from little foldy-outy jobs from petrol stations (6d), to Bartholomew’s London Street Atlas at 50s - ‘the grandest street atlas - the one the police cars have on board.’

Information offices could weigh you down with dozens of free maps, brochures and - marvellous word - pamphlets, on everything from Conducted Coach Tours to Know Your Animals (er a chapter on pigeons followed by the index?).

Then there were the guide books. The London Dossier was jostling for space in a crowded market. There were guide books for the miser (London on a Pound a Day), for 1960’s lad-about-town (Hunter Davies’ New London Spy, roundly slated here) and from the point of view of a foreign observer (London for Everyone, written by an American).

There were London guide books for tea lovers, for children, for historians, for art enthusiasts, foodies (another slim volume), anglers, students, bank fans (really), open-air entertainment lovers and more. There were books for certain areas: Soho Night and Day, for example, was by Slang contributor Frank Norman, with photographs by Jeffrey Bernard. Back when he had a steady hand.

Best of the bunch, according to Len, was Sam Lambert’s London Night and Day: ‘witty, stimulating, brilliant’.*

He concludes ‘Before you write and tell me that there’s a guide book I’ve left out let me tell you I’m up to my ears in London books and there are dozens I’ve missed out. Some of them are excellent and some of them are awful. Many of them repeat and repeat completely wrong information copied from other guide books. I’m beginning to hate guide books.’

He turns next to newspapers. ‘They vary from the pompous to the preposterous’, he writes, a description that remains 100% valid today. Let’s see if anything else has changed: 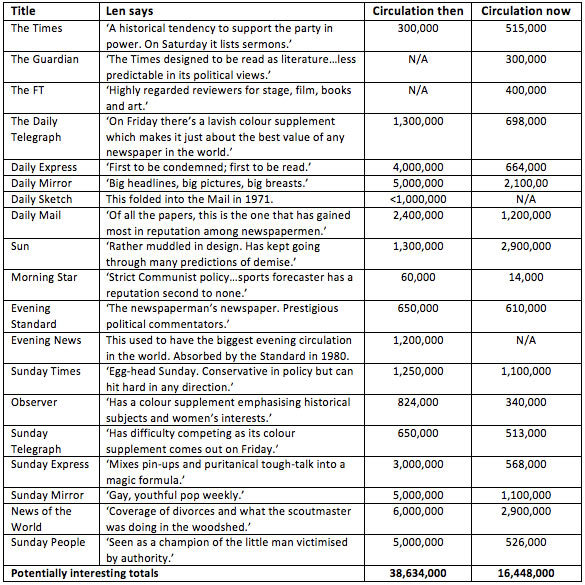 Finally, Len turns the tables and asks Londoners what they think of tourists (the people reading his book). ‘You are very clean in appearance and the men’s hair is trim and short. You are kind and complimentary about the things you see, but you overtip and you don’t complain enough.

‘You eat tourist food and pay tourist prices in places where the service is so bad that only tourists would tolerate it without punching the staff on the earhole. You resent paying top prices but avoid lower-priced places, where the natives go, for fear of dirt, disease or xenophobia.’

Glad none of those threats apply these days!

Len Deighton wraps things up with some advice from belatedly-credited book collaborator John Salmon, a name that will resonate with anyone familiar with the legendary London ad agency of the 1960s and 70s, CDP.

‘The best way to avoid petty frustration on a visit to London is to look before you leap. Check the weather before you decide where to go. Check whether it’ll be open before you get there. And find out how to get there and back before you leave.

“I always do. And I’ve lived here for the best part of thirty years.’

Missed a chapter? Catch up in the archives of the London Dossier.