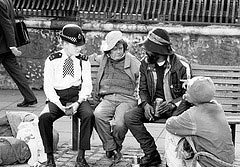 By In8vision via the Londonist Flickrpool
If anyone can tell us about slang usage in the London of 1967 it’s Frank Norman. He grew up in a series of children’s homes in and around London, embarked upon a career of petty crime, was sent to prison for a few months then emerged to pen the highly successful play ‘Fings Ain’t What They Used To Be’.

Except that his chapter of The London Dossier is actually a reprint of a piece he wrote on London slang in 1958, almost ten years earlier. This might explain the slight sense of disbelief you get when reading what purports to be the way different groups of Londoners addressed each other. Even allowing for the fact that we’re meant to be in 1967, the imaginary conversations Frank concocts seem laughably implausible.

They are also highly dubious from today’s PC perspective. Take this example of a typical, everyday chat between a gay man, a lesbian and a prostitute. First, the players:

‘We will call the queer Tangerine (who is an old queen)’, writes Frank, ‘and the brass Chechee, and the lez we will call Butch, which is just another way of saying lez.’

Is it now. Look, don’t blame us for this stuff. Anyway, let’s eavesdrop. Chechee is talking to Tangerine:

‘CHECHEE: ‘Get you darling, all done up in drag, anyone would think you were a palone. I don’t care what you do as long as you don’t do it on my beat, because I’ve only had three short times tonight, and one of them was a flage merchant.’

BUTCH: Do me a small favour, darling. I couldn’t get a fare if I tried, you don’t get any bent clients along here these days.

CHECHEE: I haven’t got time to listen to you two talking about the bona homeys that you’d like to have; I’ve got to get the rent for my lumber gaff or my ponce will give me the slingers.

TANGERINE: Never mind, you can always find yourself another Johnson, darling, there’s always plenty around.’

Johnson? Was that a London version of a John? Does Boris know?

The conversation between two imaginary drug addicts is just as exotic. ‘We will call them the junky and the viper’, says Frank, although why we can’t call them Barry and Colin isn’t made clear.

‘JUNKY: I wish I was still on the shit, man; I get my kicks from a pop in the main, but this H is giving me the itch.

VIPER: I dig, man, my chick’s real tuned into that kick, every time I see her she’s doing a flip, but she’s never got enough bread to give the pusher. She’s real gone, dad, and she’s never coming back.

JUNKY: Don’t let it get to you man, just never been a mainliner, like me. I don’t even dig those sounds no more; and chicks are just a drag.

VIPER: That’s an enormous generalisation, Junky, and misogynistic to boot.’

OK, we made that last one up.

Here are two crooks. They get names, and we get the benefit of a translation (the previous examples being almost completely impenetrable, of course):

‘BILL: What do yer reckon (think of) that bogey (policeman) who came sticking his hooter (putting his nose) round the gaff (house) when we were in there last night?

CECIL: To tell yer the truth I thought he sused (suspected) there was something buzzing (going on). And I expected him to get on the blower (phone) to the nick (police station) and ask them to send round the hurry up (police car).’

Bill and Cecil continue in this vein for another page or so. At one point, Bill complains that they’ve got a W out for him. What’s a W? A pointlessly long-winded way of saying ‘warrant’.

Frank Norman says you can hear conversations like this anywhere. ‘That is,’ he adds helpfully, ‘if you ever go anywhere.’

He gives us a few examples of Cockney rhyming slang, some prison words (‘three months - a carpet, ten years - a cockle’) and a good example of why backslang never really caught on: ‘I saw ouya the theroa ightna up the hpeilersa.’ Eh? Us neither. It’s just as well no one has to negotiate that sort of nonsense these days, lol. DYSWWDT?

Len Deighton’s introduction to the chapter is nothing to do with slang. It’s entitled ‘All through the night’, but in the very first sentence Len concedes that London isn’t an all-night city. ‘Not yet at any rate’.

However, all is not lost. Apparently there were restaurants in 1967 that would serve five-course meals at an hour ‘when New York and Paris restaurateurs have long since put the chairs up on the tables.’

That’s five courses if you could successfully go the distance, as Len’s list of all-nighters comprises one Golden Egg, three Wimpy bars, a couple of West End steak houses and, for those with the money, the restaurant at the Royal Garden Hotel.

What about 24-hour venues that weren’t restaurants? ‘The Tenpin Bowl at 30 Shaftesbury Avenue is open all night on Fridays and Saturdays’.

Well that’s something. Any bars?

‘Barclays Bank on the BOAC terminal at Victoria is open until 10pm.’ No Len, any bars? BARS?

‘The only all-night post office is in King William Street’.

Er, what about those far-out and happening 60s places? You know. The Exploding Plastic Freak Out Factory? The Spontaneous Technicolor UFO Experience? Muddle Earth?

In case all this late-night hedonism gets too draining, Len has some recommendations for where you could crash. The Mount Pleasant Hotel was one of the cheapest of the large hotels back then (we think it might have turned into a BestPremierLodge since then), but if that was too expensive there were hostels - ‘you will probably be provided with a cubicle’ - or benches at railway stations.

‘Put newspaper on them to quell the draft,’ advises Len. ‘The waiting room’s no good for a sleep because the police check railway tickets about midnight and watch the place afterwards.’

Perhaps the most striking indication of how times have changed since the sixties relates to the bit about benches. You could lie down on them! The primary consideration when designing public seating these days is of course to deter people from sitting on them, let alone stretching out.

Back to 1967, and the sun is slowly rising over the City That Never Sleeps Unless It’s Night-time. The usual advice for early risers would be to go and watch London’s markets come to life. In fact we seem to recall Len himself recommend such an excursion in an earlier chapter. But he’s had a change of heart.

‘Markets are markets, and a crate of peaches in Rome, Boston or Paris is the same crate of peaches.’ You old romantic. And anyway, ‘don’t expect Covent Garden to be as interesting as Les Halles nor to find anything to match the onion soup and other meals I have devoured there.’ Sell it, Len, sell it! ‘The best you’ll get at Covent Garden is the beer and the rather powerful tea.’ We might end up going back to bench at this rate. Does the old fruit & veg market offer nothing? Well, there is this: ‘See the down-and-outs - also the nuns - picking up the spilled items. It’s a recognised thing that the needy can do.’

Fing’s indeed ain’t what they used to be.