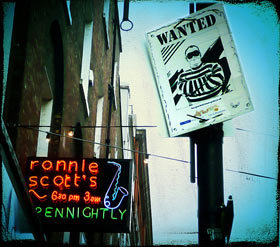 By Buckaroo Kid
According to Steve Race, jazz fans used to laugh condescendingly when people called London the ‘swinging’ city. For them, London had been swinging for a long time - ‘in the original, jazz sense of the word’.

From this chapter, it certainly sounds as if jazz might have had the upper hand over pop in the mid-60s, at least as far as live performances were concerned. In just one night in 1966, Race says, it was possible within a mile of Piccadilly Circus to see Erroll Garner, Earl Hines, Buck Clayton, Bud Freeman, Rex Stewart and Jimmy Witherspoon.

He could have made a few of those names up just to bulk out the list. We’d be none the wiser. But there’s no doubt that the joint was jumping, daddy-oh. Jazz was all over the place. To the untrained ear, of course, it still is. So the important thing for foreign to do was plan in advance. ‘Drop a line to Harold Davison at 235 Regent Street, W1, to ask what concerts are on,’ Steve suggests.

Two things to mention here. Harold Davidson wasn’t just some random lonely bloke. He was a jazz impresario who, incidentally, stumped up the cash for Ronnie Scott to open his club (of which more anon). And, yes, people actually did that sort of thing. Write letters to other people, we mean. Asking for information. And not getting two-word replies.

In fact, Steve even suggests you get on the phone and speak to Roy Burchell of the Melody Maker. ‘He knows the scene well and won’t mind a brief phone call’.

People talking to one another seems a world away from today’s existence, but it was clearly an important element of jazz back then. Steve’s jazz record shop recommendations are based not just on the range of product they stock, but on the quality of chat you get with the owner and other customers.

Dobell’s Jazz Record Shop, which used to be at 77 Charing Cross Road, contained 20,000 jazz LPs but more importantly it also contained Doug Dobell, ‘the Onassis of jazz-record retailers’. Yes, the comparison is confusing for us too. In the bargain basement, ‘several international jazz friendships have been forged following a brisk argument over a mint-condition ‘Miles Ahead’ at 22s. 6d.’

Then there was Jimmy Asman’s at 23 New Road, managed by one Pete Payne. ‘Get talking to him and he’ll probably tell you about the City of London Jazz Society, which sponsors record recitals by star critics on alternate Tuesdays at the Mail Coach, Camomile Street, EC2. Admission is 2s 6d but all wives and girlfriends are admitted free’. Whether any stayed for long isn’t noted. It was just some bloke playing records on his Dansette, after all.

If you’d met Doug and Pete but your craving for in-depth knowledge about vintage jazz still wasn’t satiated, there was only thing for it. You had to pay a visit to London’s walking jazz reference book, the legendary (it says here) Brian Rust. God knows what Mr Rust got called at school. And if his name didn’t immediately evoke the jazz coolness of Sonny Rollins or Earl Hines, his address didn’t help much either: 38 Grimsdyke Road, Hatch End.

If a jazz fan wanted to actually, you know, listen to some jazz rather than just talk about it, Steve Race has some suggestions.

Oxford Street’s 100 Club was around back then: ‘a stifling, bare cellar where the sweat of the dancers glistens through the steam rising from the players.’ Mmm, nice.

The Bull’s Head at Barnes featured lots of big jazzy names and was adorned by paintings from the nearby Hammersmith Art School. If you go by car, Steve confidently assures you, ‘there’ll be no parking problems on arrival’. The Bull at Barnes is still going strong, despite an attempt by someone, who’d consciously moved in next door to one of London’s most famous and long-established JAZZ venues, to get its music license revoked because of the noise.

The Tally Ho in Kentish Town fared less well. In fact it’s gone altogether. Perhaps Steve’s review was a contributory factor: ‘Atmospherically speaking, the Tally Ho’s preposterous 1920’s hunting décor, its shortage of chairs, ghastly acoustics, and the fact that the bass drum rests half on the stage and half on a beer crate, combine to give the place a strong sawdust charm.’

Or perhaps there came a time when people could no longer bring themselves to invite their friends to a night ‘in the Ho’, and the pub went into terminal decline as a result.

Anyway, on to Steve’s favourite jazz venue, Ronnie Scott’s. It had opened in 1959 with the help of a loan from the aforementioned Harold Davison and moved to Frith Street in 1965. Steve reckoned it was probably the best jazz club in the world. However, since his description of it is pretty much as accurate in 2010 as it was in 1967 (although we suspect they no longer sell Piesporter Riesling and, if they do, it costs a lot more than £1.20), his observations about the club needn’t detain us here.

Instead, let us absorb the shock news that ‘Jazz’ was the final chapter of Len Deighton’s London Dossier. But rather than yield immediately to the debilitating effects of Dossier cold turkey, take solace in the fact that next week brings a bonus feature in which Len rounds things off with a look at the British mass media of the 1960s.

Browse past chapters of the London Dossier.