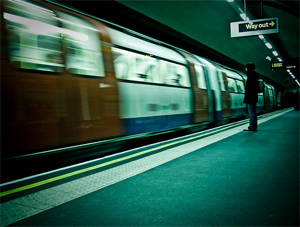 Image by silvertony45 from the Londonist Flickr pool
Oh what a tangled web we weave, when first we practice to work out what the hell is going on with PPP tube contracts. There's more headscratching today as it emerges that the PPP arbiter, Chris Bolt, is sticking to his guns over his estimate of how much it will cost Tube Lines to carry out their upgrades - and it's £400m more than TfL's got.

The Guardian hears that Bolt's planning to leave a 'loophole', allowing TfL to cut back on upgrades rather than having to scrape together the cash - which is just marvellous for us. Boris is understandably also fuming after transport secretary Lord Adonis knocked back his request for government funding - even though the government imposed the system, and TfL says the original contracts say the PPP companies and their shareholders should raise the money.

It's all the more galling when a report out today blames Adonis's own department for "poor and inadequate" management of the Metronet contract, that cost taxpayers - wait for it - £400m. And while we're on that magic number, TfL say Tube Lines have blown - wait for it - £400m on management fees because of the myriad contractors involved in the mess of companies seconded to do the work. The upshot of all this in-fighting, of course, is that we're left stuffed into trains that aren't fit for the 21st century. Cheers.