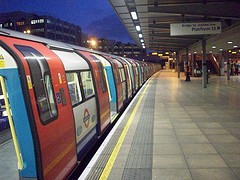 Photo / Andy Wilkes
TfL are threatening to take legal action against PPP arbiter Chris Bolt, after he ruled that maintenance firm Tube Lines could charge up to £4.4 billion for upgrade work over the coming seven years, a full £400 million more than TfL is willing or able to fork out.

Thumping his tub to a socialist-sounding tune, Boris Johnson lamented that ordinary Londoners were "being asked to write a blank cheque" in order to prop up Tube Lines and stroke the crocodile skin-clad wallets of shareholders at its parent companies, Bechtel and Ferrovial. He may have a point: Tube Lines' original bill hovered around the £5.75bn mark, suggesting that they were happy to just rack a few extra digits onto the figure and hope nobody noticed. The consortium has been feuding with TfL since last year, when it turned out that Jubilee line work would run and run throughout 2010, prompting a series of playground-level spats between the two sides; a mea culpa from departing TL boss Dean Finch did little to smooth matters over.

A letter by TfL's Richard Parry to Bolt earlier this week warned that the missing £400m would have to be found by taxpayers, in the form of higher fares, or else planned upgrade work, this time to the Piccadilly line, be postponed. Parry's pleas have, it would seem, fallen on deaf ears. Perhaps David Cameron will see fit to bring it up during today's PMQ and direct a few barbed questions to the architect of the disastrous Tube PPP plan himself, a certain Rt Hon Gordon Brown MP.