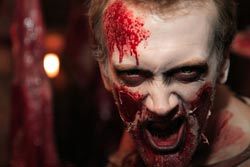 Perhaps piqued that attraction upstart the London Bridge Experience is based in actual catacombs with genuine claims to hauntings and macabre discoveries - we know, we've spent the night there - the company behind the more established but less plague pit authentic London Dungeon across Tooley Street are taking the small fry to court for allegedly acting illegally by copying their attraction and driving away trade.

Merlin Entertainment, the corporate behind the Dungeon, attempted to impose a 200m restriction on new rivals, the London Bridge Experience, to prevent them from advertising on the same patch but this would effectively have barred LBE from their own premises. When they refused to cooperate, Merlin whipped out the legal team.

Merlin clearly have some clout. Exit London Bridge Station and you're straight into the interminable and unfathomable queues for the Dungeon, flanked by construction workers with gory wounds and other such pantomime. You'd be forgiven for not noticing the London Bridge Experience if you weren't looking for it.

Given the tourist's seemingly insatiable appetite for scary attractions surely there's enough leisure pound to go round? Whatever, the London Bridge Experience needs public support to help them through this. Danny and Lee, the brothers behind the LBE who invested their life savings in realising this gory tourist dream, are in the process of putting together a petition - watch this space for more news.