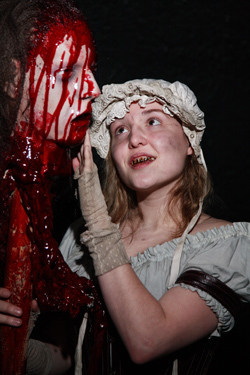 It’s changed radically since we spent the night down there. For one thing, it seemed to be full of people sipping champagne - we don’t remember that.

The ground floor contains a small museum about the bridge, offering a potted history and a handful of artefacts. They could have done a bit more with this, really, but you sense the money’s been spent on more interactive areas.

The rest of this level comprises the London Bridge Experience itself. Visitors are taken on a theatrical trail through some of the stories connected with the bridge. The shade of John Rennie, resplendent in a blue haze, opens the show. From there, we’re periodically ushered from one scene to the next, meeting a Roman foot soldier, William Wallace, a head preserver, Charles Dickens and several others. The acting is lively and engaging, with the emphasis more on showmanship than education.

After crossing a dubious recreation of the Great Fire (which we now know was started by a row of incandescent light bulbs), and the crypt of the bridge’s 13th Century founder (that Perspex coffin may not be the original), we come to a decision point: leave now and grab some more champagne, or descend into the London Tombs.

Down we went, in hardhats and high-vis jackets, to play once more amongst the corpses. The London Tombs dispenses completely with any notions of history. Unless we’re missing something, at no point in its 2000 year chronology was the bridge troubled by a rock monster, zombies or a giant python. But hey.

The Tombs do offer genuine scares, even to the most cynical of punters. The living dead are hiding behind every corner, ready to pounce. Strobe lighting is used to disorientate in an Aladdin‘s cave of dismembered body parts. It’s like entering the cluttered living room of your creepy aunt, with the carriage clocks and faded postcards replaced by twitching corpses and buckets of flesh.

Should you go? Well, not if you’re hoping to learn a great deal. The emphasis really is on entertaining and history buffs will be disappointed. (The London Bridge Experience doesn’t even have a model of its subject - for that, head across the water to St Magnus the Martyr, which houses a splendid replica in its nave.) In this sense, it’s a missed opportunity.

But if you want an ‘experience’ and enjoy getting the bejesus scared out of you, there’s only one place to go.

Oh, hang on, no, there’s the London Dungeon across the road as well. And the Clink prison museum round the corner. And the Chamber of Horrors a short Tube ride away. Plus the Tower Bridge Experience if bridges are your thing. Damn it. We just wrecked any chance of getting quoted in the publicity blurb.

Image courtesy of the LBE.