From Bad to Worse to Best 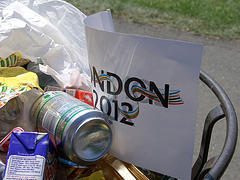 Hmm. Londonist hasn’t always had happy bouncy things to say about the 2012 Olympics. And it is rather likely that we will come up with some more searing satirical observations before too long. That is what Londonist does.

But just for today, it is with vague approbation that we report on one of the side effects of the whole proceedings – the Personal Best scheme.

It is true that the idea behind it is a bit twee and more than a tad patronizing: persuading disadvantaged people to ‘volunteer’ for training, and then, upon completion of such, rounding them up to be officially congratulated as part of the increasingly comical Seb and Ken Circus. The Olympic connection is also a bit tenuous – the aim is that ‘graduates’ will be given an opportunity to apply for an interview to become a volunteer helper for 2012. It does feel like some contrived, quango-esque idea to imbue the Olympic run-up period with visible community dividends.

But habitual cynicism aside here, there is just a chance that the scheme really will have lasting, tangible benefits. There really can’t be anything wrong with taking the largely unemployed or unemployable, and giving them the key skills – literacy, numeracy, first aid, health and safety and computer skills – that they need to change their lives around. One can almost feel oneself falling for the shpiel: