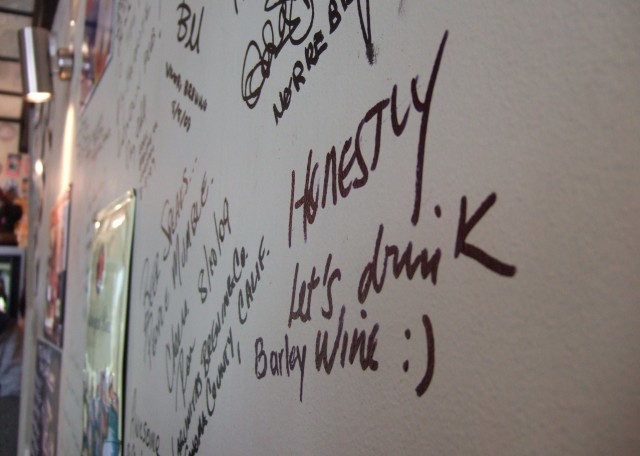 Tucked around the back of Borough Market is a very small pub. It’s rare to find a drinking establishment whose indoor floorspace is more diminutive than that of its men’s toilets (which it borrows from the adjacent market), but The Rake is definitely one of those pubs.

Don’t be put off by its modest proportions, though. As compressed as the interior gets on Friday evenings, on a Saturday morning it can be a quiet, relaxed sanctuary from the market’s masses and inexplicable vegetable photographers. It was such a Saturday morning that we last visited, to find only a small handful of customers enjoying a quiet and possibly well-deserved beer. They had come to the right place, for beer is what The Rake is all about.

For the uninitiated, The Rake is run by Utobeer, the beer specialists behind the excellent nearby market stall of the same name. The driving force behind both operations would seem to revolve around the same type of product-line – a huge variety of great beers from around the world. On our visit we were greeted by three ales on hand-pump, five keg offerings and two massive fridges stocked with myriad bottled delights. It was hard not to salivate, frankly. Even gluten-free drinkers are well served, with bottles of Celia GF pilsner and Mongozo pilsner (see our guide to gluten-free drinking).

Of course, there is such a thing as too much choice. Fortunately, the knowledgeable barman was of some assistance, so we were able to sample several decent drinks without too much dithering. The highlights of our visit were the Sierra Nevada Anniversary Ale (a wonderful bottle-conditioned Californian pale ale) and the supremely powerful Aventinus Eisbock on draught (a great example of freeze distillation).

Despite its size, the pub’s interior was bright and welcoming – decorated with beer mats, tin signs, European beer ephemera and scrawled dedications from brewers, all illuminated by large windows at the front. Unsurprisingly, to make the most of the space, indoor seating was limited to a handful of tall stools and tables, but the covered (and heated) outside drinking area provided more seating options.